Today’s post was supposed to be about how to have an effective brainstorming session. Unfortunately, when I started researching brainstorming and what it’s really all about, I nearly put myself to sleep.

I’ve never come across so much talk of meetings and rules and conference rooms in a topic that supposed to be creative. Then again, that’s part of the problem: brainstorming was actually designed to be a method for solving problems. Creative ideas might be needed to solve problems but generating ideas for new, creative projects or initiatives isn’t really the same thing.

As the Wikipedia page for brainstorming says:

Today, the term is used as a catch all for all group ideation sessions.

We’re using the term brainstorming so often, in so many contexts, that it’s starting to become trite. What I did find in my research were some insights about better ways to come up with fresh ideas than a structured brainstorming session. I think these four in particular could be really useful.

Obviously counterintuitive to the whole idea of brainstorming, New York Times best-selling author Baratunde Thurston points out in this video how beneficial it can be to generate ideas individually before presenting them to a group.

As he says, brainstorming sessions often have social issues that lead people to hold back their ideas, such as not wanting to be the first to speak up, not needing to participate if one or two people contribute a lot and drown others out, or just being worried about having your ideas critiqued, especially by your boss.

When I worked as Head of Content at Attendly, the CEO, Scott, and I would find ourselves every couple of weeks in a meeting room with a whiteboard, colored markers and a lot of awkward silence as we tried to force ideas onto the board. We rarely came out of those sessions with great ideas to act on.

When I look back at the best content I produced for Attendly, almost every single idea came from an individual member of the team sharing an idea or an experience they had.

Let’s take a look at posts we’ve published on the Buffer blog recently to see if this theory holds up:

The most popular post I’ve ever written certainly falls into that trend. Leo came across a couple of posts that helped him think up this idea, and passed it on to me.

Here are his comments on the original Trello card for that post: 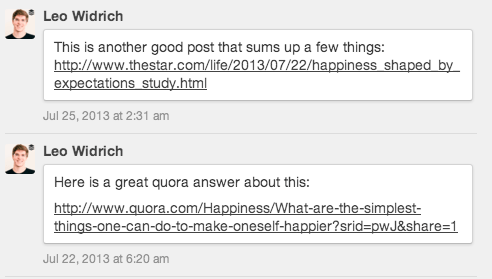 From Leo’s idea, that post grew into a success, with over 200,000 Facebook likes, over 6,000 Tweets and it was republished several times.

Another good example is this post about how Twitter’s embedded image previews increase engagement. This one grew out of Leo’s experiments with the new feature for our own @buffer account.

For a more recent example, our CEO, Joel, had been experimenting with his own Twitter habits and had seen some good results. He shared his process with me, and that became this post.

Although a chat with other team members is often helpful (or even necessary) to help shape an idea into the structure of a successful blog post, the initial ideas of our best content rarely come from a group effort.

2. Debate your ideas — you’ll come up with even more

Another surprising argument against brainstorming is that the general rule that a brainstorming team should accept every idea without criticism is actually harmful to the process.

A study conducted in both the USA and France found that debating ideas and offering criticism actually improves the number of ideas generated by a group.

The group that was told to debate and criticize the ideas they came up with actually generated the most ideas on average. The individuals involved also generated more ideas when questioned by themselves afterwards if they had been involved in the “debate” group. Even more impressive: this held true across both countries, so it’s not just a culture-specific phenomenon.

If you do have to have brainstorming sessions, you could take this on board and open up your sessions to include some debate around which ideas would work best. Another way to make this work for you would be to just grab one or two other people and bounce off each other. Especially if you can find a couple of trusted friends or colleagues who aren’t afraid to jump into a debate with you, this could open up some new avenues to explore.

I once heard someone say that the best boss they ever knew had a standing rule: don’t bring me a problem unless you’re also offering at least one possible solution.

I try to remember this whenever I bring up an issue with someone, since putting a problem in your boss’s hands and walking away isn’t a fast track to getting it solved.

I also use a modified version of this when I pitch changes to something I’m working on. For instance, if I start on a post for the Buffer blog and I find that I’m uninspired by the topic or struggling to make it work, I’ll try to find a new angle to suggest, rather than giving up on it.

What I’ve found works best in these cases is to suggest a new angle or a replacement idea that’s as good as the original. In the case of this post, I might go back to Leo and say something like this:

Rather than what we started with, I’ve found some great research on the pitfalls of brainstorming and some suggestions of different ways to go about idea generation. I think this could be really useful to people who are fed up with doing the same old thing and not getting the results they want. How about I go for an angle like “4 ways to generate better ideas than you ever could in a brainstorming session”?

Rather than asking Leo to suggest something new, I’ve offered up a solution I can run with straight away. So long as it’s a good fit, he only needs to say okay.

If you’re spending time alone thinking up ideas, this is a good rule to keep in mind as well. Fleshing out those ideas before you suggest them to your colleagues can help you to “sell” your ideas more effectively. It also helps you to explain your idea more clearly if you’ve spent some time honing it and imagining how it could work in context.

4. Act before you think to capitalize on inspiration

Another way of fleshing out your ideas is to act on them straight away. In the same video I mentioned earlier, Behance cofounder Scott Belsky suggests acting on ideas rather than thinking them through first.

Acting on your idea doesn’t have to mean implementing it, it could just mean getting it out of your head and into some kind of physical form. Let’s say you’re spending time alone, coming up with some ideas for increasing conversions from your blog which you’ll share with your team later on.

If you come up with some ideas for new calls-to-action or a redesign for your blog, you could whip up a quick wireframe or draw a sketch of how that might look. You could even grab some screenshots of other sites that are doing a similar thing. This gives you something visual that you can show to your colleagues, helping them to imagine your idea as it might be implemented.

If you come up with some new topics for your blog content, you could flesh these out with a quick outline of what you might cover in each one and what the takeaways would be for your readers. Again, this gives you something tangible rather than a vague idea that’s easy to brush off.

It also gives your colleagues something they can push against when debating, so it could lead to even better ideas once you get back to your team.

The other great thing that comes from acting immediately is that you can act on your initial inspiration in the moment. I’ve often found that when I save an idea for a blog post or a project and come back to it later, I’ve either forgotten my initial plan or I’ve lost interest in it. Getting something—anything—on paper immediately can help propel an idea forward into becoming a real project.

How about you—any brainstorming horror stories? Or do you actually find it really useful? Let us know what your experience has been like in the comments.

If you liked this post, you might also like How our brains work when we are creative: The science of great ideas and How to Optimize Your Environment for Creativity with The Perfect Temperature, Lighting and Noise levels