I’ve written about positivity before, in terms of cultivating a positive outlook for yourself. What I want to write about today is cultivating positivity in your workplace, particularly if you’re a leader. By focusing on positive interactions with your employees and encouraging an upbeat emotional state as often as possible, you’ll be more likely to have a happy, productive and efficient team.

How positivity affects our brains

To start with, let’s look at how positive and negative emotions work in our brains, and what we can learn from that.

Positive emotions generally work in an opposite way to negative emotions. So, while emotions like fear, anxiety, stress and anger narrow our focus, inhibit our concentration and decrease our cognitive abilities, positive emotions can do the opposite. When we’re feeling upbeat and happy, we’re more likely to have an inclusive focus than a self-centered outlook, and to perform better on cognitively demanding tasks.

That is why exercising often makes us happier, especially if we choose to go for a demanding work-out.

In the face of negative events, our brains struggle to perform at their highest—or even normal—capacity. Our prefrontal cortex, the brain’s “executive center” is pushed aside so the amygdala can take over and prepare the body for crisis.

This shift in control to the low road favors automatic habits, as the amygdala draws on knee-jerk responses to save us. 1

When we’re stressed or scared, for instance, we struggle to think clearly, to coordinate well with others, to take in new information and to come up with new ideas. Even existing routines suffer, as our concentration is taken over by our negative emotions.

The more intense the pressure, the more our performance and thinking will suffer. 1

In his book Social Intelligence: The New Science of Human Relationships, Daniel Goleman explains that heightened prefrontal activity, which is associated with positive emotions, enhances mental abilities such as “creative thinking, cognitive flexibility, and the processing of information.” The left prefrontal area of our brains, which lights up with activity when we’re in a positive mood, is also associated with reminding us of the good feelings we’ll have when we reach a long-term goal.

Here is a break-down of where in the brain our positive emotions arise, which tends to be in the Amygdala. Interestingly, in an experiment from Duke University, for Young Adults (YA) have more activity in the left Amygdala, whereas as we age and turn into Old Adults (OA), our place for positivity moves to the right Amygdala: 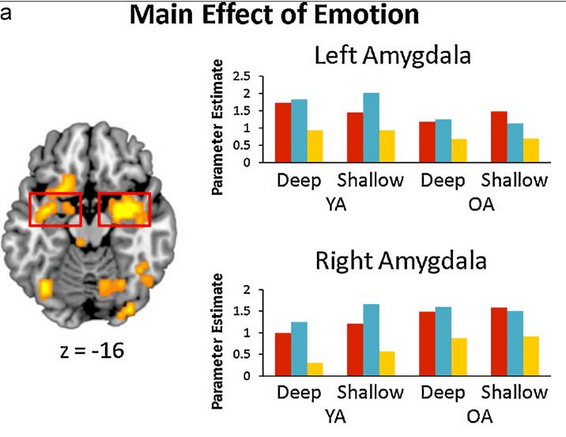 Goleman’s book Focus: The Hidden Driver of Excellence also discusses positivity and how it affects us. Goleman explains how positivity is measured at a neural level, which involves looking at the length of time we can maintain a positive outlook after something good happens. In a study of participants with depression, control subjects with no mental illness were able to hold onto positive feelings for much longer than those with symptoms of depression.

The way leaders use positivity when communicating with employees can make a huge impact on their emotional well-being and their performance. I was really surprised how big the impact of these interactions can be. Goleman looked at several ways this can happen in Social Intelligence.

In one experiment, the emotional tone of a leader delivering news to an employee made more impact that the news itself. When negative feedback was delivered with a warm tone, the employees usually rated the interaction positively. On the other hand, good news, such as achieving a goal, delivered with a negative tone would leave employees feeling bad.

Employees are also more likely to remember negative interactions than positive ones, and to spread the negativity among other employees.

When sharing feedback with employees, negatively-focused discussions are more likely to increase feelings of guilt, fear and anxiety. As I mentioned earlier, these emotions work against our cognitive abilities, forcing us into a spiral of being stressed about the need to improve, while our brains are too busy being stressed for us to actually improve.

In Focus, Goleman looked at how talking about positive goals and dreams can be a better way to encourage employess. Richard Boyatzis, a psychologist at Case Western Reserve University explained that focusing on what someone needs to do to “fix” themselves will effectively close them down to new possibilities or ideas.

Boyatzis did an experiment on college students, scanning their brains during interviews about college life. For one group, the interviews focused on positive outlooks—where they hoped to be in ten years, and what they wanted to gain from college. The other group had a negatively-focused interview where they talked about the stresses and fears of college life, struggles in their performance and workload and troubles in making new friends.

A conversation that starts with a person’s dreams and hopes can lead to a learning path yielding that vision. 2

Marcial Losada, and organizational psychologist, found in studying the emotions of high-performing business teams that the most effective teams had at least 2.9 good feelings for every negative moment.

No doubt, we can’t avoid all negative moments, but adding enough positive ones to offset those that trouble us can make us happier and more productive.

Positive leadership – 3 things to focus on

Improving the positive ratio of your own team can be as simple as making some important changes to your own leadership approaches.

1. The two most important states: Listening and show empathy

Showing empathy to your employees helps them to develop a stable base at work, so they can feel comfortable to explore and take risks. This can lead to more creativity and better problem-solving within your team.

If we look at some of the best interviewers in the world and how they listen, we can quickly see how well trained they have their own sense of empathy.

Boyatzis found in his research that the part of our brains that focuses on goals actually inhibits the part that helps us to understand and empathize with others.

The most successful leaders cycle back and forth between these within seconds. 2

2. A caring boss is more important than what you earn

Making your employees feel heard and understood can actually improve their physical health as well as their mental well-being:

Workers who feel unfairly criticized, or whose boss will not listen to their problems, have a rate of coronary heart disease 30 percent higher than those who feel treated fairly. 1

Simply listening to your employees helps them to offload their negative feelings and release tension. Carrying around anxiety or frustration can hinder an employee’s performance, so try to tap into how they’re feeling on a regular basis.

In a survey of employees at seven hundred companies, the majority said that a caring boss was more important to them than how much they earned. 1

Our sense of engagement and satisfaction at work results in large part from the hundreds and hundreds of daily interactions we have while there, whether with a supervisor, colleagues, or customers.

It’s no secret that culture is a huge part of how we hire new employees at Buffer. Making a priority of how well your employees get along is something I hadn’t heard much before, though, and I like this idea a lot. Especially in bigger teams, where you may not interact with each employee as often, ensuring that there is positive chemistry among team members could make a big difference to your overall company culture.

The accumulation and frequency of positive versus negative moments largely determines our satisfaction and ability to perform; small exchanges—a compliment on work well done, a word of support after a setback—add up to how we feel on the job. 1

Obviously, looking at leadership styles from successful entrepreneurs and their daily habits it becomes clear pretty quickly that they all have thought about this approach a lot. Yet, a lot of times this is still an approach unheard of.

How about you, would exchanging criticism for encouragement work better at your workplace?

If you liked this post, you might also like “What happens to our brains when we exercise and how it makes us happier” and “10 Simple Things You Can Do Today That Will Make You Happier, Backed By Science”

PS: Only last week we launched brand new Buffer analytics, with Google Analytics support, fan and follower growth options and more. Check it out and see if it can help your social media efforts.