I recently covered some big changes that Twitter has made, and here is another one. Twitter just added inline images to tweets so that you don’t need to click a link to see an attached image, but rather the Tweet itself expands. This only works with images uploaded directly to Twitter, which use a pic.twitter.com URL. If you Tweet a Vine video, you’ll also see this inline on Twitter.com or in the official Twitter apps for iPhone and Android.

On top of that, you can easily post any image you find on the web, straight as a fully expanded image to Twitter with Buffer’s browser extension.

Before we jump into Twitter’s expanded images and a ton of super-fun learnings around images on Twitter, I’d first love to walk through how to share an image on Twitter.

Attaching an image to a Tweet on mobile is super simple and only takes a few clicks. First, tap on the new Tweet icon in the top right hand corner of your screen. Then tap the camera icon and you’ll be given the option to attach an image or take a new images using the phone camera.

You can attach up to four images to a single Tweet, and as you attach images your character count will be updated, showing you how much space you have left in your Tweet.

Attaching an image to a Tweet from Twitter.com is much the same experience as on mobile. The first thing you need to do is create a new Tweet by either clicking the Tweet button in the top right corner of the page or the Tweet box at the top of your Home timeline.

Once you’ve started to compose your Tweet you can add images using the camera icon within the Tweet composer.

Tweeting an image with a link

If you’d like to include a link within your Tweet alongside an image, simply copy and paste the link into the Tweet composer text field. A URL of any length will be altered to 23 characters, even if the link itself is less than 23 characters long. Your character count will reflect this.

How Twitter’s newly expanded Tweets stand out in the stream

Here’s what Tweets with images look like now on Twitter.com:

And here’s how it looks in the Twitter stream:

In the official Twitter apps for iPhone and Android, images are automatically expanded as a preview, and you can tap to open the full image. Here’s what the new Twitter stream looks like on Android: 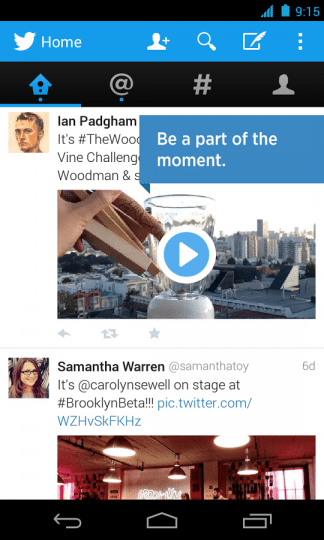 It’s not surprising that Twitter’s focusing on images and videos uploaded to the service itself, and in fact social media scientist Dan Zarrella found in research prior to this change that Tweets using pic.twitter.com links were 94% more likely to be Retweeted.

Dan also found that Tweets including Instagram links were 42% less likely to be Retweeted. I’m interested to see what kind of stats come up in Dan’s future Twitter research, after this change from the company itself.

How inline images have affected our engagement rates so far

We’ve been experimenting with this change by adding images to a lot of the tweets from our @buffer Twitter account and have noticed a big difference in the engagement we’re getting. To get a better idea of what a difference inline images has made, I took the last 100 tweets including a link from our @buffer accounts (not including any Retweets) and compared the averages of the tweets with and without images included.

Using Buffer’s built-in analytics, we were able to look at the number of clicks, favorites and Retweets each of our Tweets received.

Here are the stats taken from averages of our last 100 Tweets.

The first data point we looked at was “clicks“. Here is the result:

Our click-rate did grow, but not by very much. My theory on this is that with an inline image, there’s more content for the user to consume without leaving Twitter (which is probably what Twitter wants), so they’re not much more likely to click-through. Of course, that’s just a theory so it’ll be interesting to see what the data says over a longer time period as we keep experimenting with this.

Favorites increased quite a lot. Along with Retweets in the graph below, this shows a lot more engagement with the Tweets themselves. Clicks, on the other hand, show engagement with the original content. This could explain why clicks didn’t increase as much—if Twitter is hoping to increase engagement on average with Tweets within your stream, it appears it’s working from our early indications.

I’ve embedded the full list of analytics at the bottom of this post in case you want to take a look, and here’s a quick overview of the changes we’ve seen:

How to make posting great Tweets with images easier

If you want to try adding images to your tweets to increase engagement, here are a couple of tips that work for us.

1. Right click any image on the web and “Buffer this image”

The Buffer browser extensions let you right-click on any image you find on a site and use it in your tweet. We automatically add the link of the page, so you can easily credit the owner of the image. This uploads the image to Twitter itself, which means Twitter will show it inline.

Here’s how to do that:

First, with the Buffer browser extension installed, right-click on an image and choose “Buffer This Image”:

The image will be added to your post in its full size:

Something to be particularly aware of now that images are displayed inline is that if you tweet the title of your article without explaining the image, it could be confusing for your followers. We found that writing a tweet which gives context to the image itself and simply including a link for our followers to read more worked well.

So for example, the original title of the article below was: “The surprising history of the to-do list and how to design one that actually works”. Clearly, that caption doesn’t relate very well to the image.

So instead, we changed it to “This is Benjamin Franklin’s original to do list”, which was a much better caption and gave the Tweet a whopping 111 retweets:

It can be easy to get carried away with something that shows so much promise like this, but don’t forget that your followers probably want to see some variety from your Tweets. As you can see from our analytics near the top of this post, we’re still seeing some great engagement on Tweets that include a link without an image. In fact—that screenshot shows that link-based Tweets without images can get even more click-throughs that those with images.

A few ways to vary your Tweets are with the following;

Big things are happening at Twitter right now. Having just announced the company’s IPO, there’s no slowing down on new features. In fact, just today another one was announced: custom timelines for TweetDeck. So where is the company heading? It’s hard to guess from the outside but it probably wouldn’t be a big leap to imagine more inline media in the future.

Some people have pointed out how advertising could become a bigger part of Twitter’s strategy, with inline media helping to encourage more of that. Others have pointed out that words are taking a backseat in social media these days, with images and other rich media becoming more of a focus. What do you think is coming for Twitter? Let us know in the comments.

Be sure to try Tweeting images with the Buffer browser extension and see if you’re getting the same results as we have seen above. We’d love to see how this works out for you.

P.S. If you liked this post, you might also like The surprising history of Twitter’s hashtag and 4 ways to get the most out of them and 7 Big, Recent Twitter Changes you Should Know About to Optimize Your Tweeting

Check out the full stats used for our analysis as a spreadsheet or images one and two. From left to right, the column contain number of Retweets, Favorites and Clicks. Tweets with images are color-coded green.