Bigger doesn’t mean better when it comes to work. Jeff Bezos, the CEO of Amazon famously coined this with the 2 Pizza rule:

One former executive recalled that, at an offsite retreat where some managers suggested that employees should start communicating more with each other, Mr. Bezos stood up and declared, “No, communication is terrible!” He wanted a decentralized, even disorganized company where independent ideas would prevail over groupthink.

According to Bezos, the ideal is the “two pizza team:” if a team couldn’t be fed with two pizzas, it was too big.

Working with a small, scrappy startup team, I often find myself wishing for more brains on deck to work on cool projects, build more shiny features, and talk with our customers. It’s just natural to believe that larger teams means you’ll get more awesome stuff done, and so much more swiftly — which is why I was taken aback when I learned that throwing more people at a problem is one of the most common productivity traps that you can fall into.

In fact, the conventional wisdom that two heads are better than one — or the more brains you have on a problem the better — is completely wrong.  People in smaller teams are far more personally productive.

As group size rises, all sorts of issues spring up. Individual performance levels diminish and people start to grow less engaged. So while larger teams may be getting more done altogether, it’s happening at a rate lower than the sum of individual efforts.

More people means more of everything — more good to great, and more bad and ugly — in rallying a group of human beings to get something done. Even if more people provide a greater pool of resources, they also require greater amounts of coordination and management, to the point where size becomes an impediment.

Forget herding cats, here’s why herding humans is challenge enough. You have to grapple with these three hidden costs that start to climb: coordination costs, motivation costs, and relational costs. Let’s take a closer look:

What Hackman found most important, though, is not the number of people but the links between them that accumulate when group size increases. The coordination cost proliferates with every new addition, because management is a project of handling the links.

Look at this formula showing how the links grow at an accelerating rate: 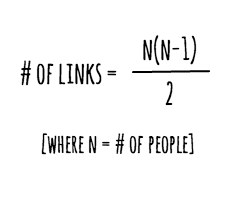 Every steep jump in links also produces a steep jump in the potential for mismanagement, misinterpretation, and miscommunication. Delays emerge from the snowballing time and effort required to keep everyone informed, coordinated, and integrated. There’s even a name for the delaying phenomenon in the software development world —  Brooks’s law, which states that:

To contrast, consider groups like the Finnish games company, Supercell, composed of only about 100 employees but making $2.5 million a day, with two “top grossing games …  built and launched in six months by teams of five and six people.”  That magic number for the most effective teams varies, falling anywhere between four to nine, and more often six or seven.

What’s clear is that if you want your herd of humans to get more stuff done, avoid having your team numbers hit double digits.

Motivation Cost: The Discouragement of Getting Lost in a Crowd = Social Loafing

The mere perception that you’re in a group can deplete your own motivation and effort, a phenomenon known as social loafing.

A classic study by Bibb Latané demonstrated the social loafing effect with groups as small as two to six. Participants wearing blindfolds and noise-masking headphones had to shout as loud as they could. Everyone made less noise in groups compared to when they shouted alone.

While the total sound produced was louder, it didn’t grow in proportion with the group size. People in teams of six shouted at 36% of their full individual capacity. When researchers controlled for any possible coordination loss by having participants shout in pseudogroups — fake groups where participants believed they were shouting in concert when they were actually shouting alone — people still didn’t perform at full capacity, producing 74% of their full potential sound.

We can probably best explain this phenomenon with Ringelmann’s Rope pulling experiment. It shows more clearly than anything how input per head decreases as group sizes get bigger: 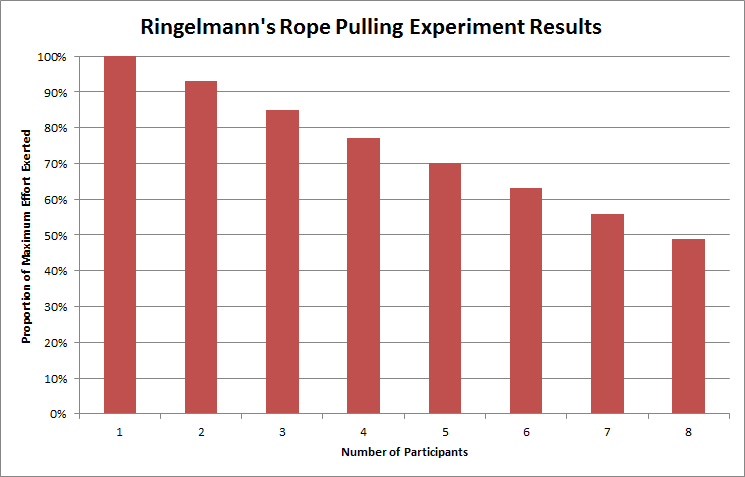 Social loafing is a feedback problem. Latané and his colleagues explained that:

“when groups get larger, you experience less social pressure and feel less responsibility because your performance becomes difficult, or even impossible, to correctly assess amidst a crowd. It’s no wonder that when credit and blame get harder to assign, you start to feel disconnected from your job.”

While initially you might not be cognizant of social loafing, that unconscious disengagement can quickly morph into rational, self-interested behavior and active disengagement. If you don’t feel like you matter, then what’s the point of trying so hard? That’s one worrisome threat of spiralling disconnection and decreased motivation.

Coordination loss and motivation loss are concepts that have been around for awhile, based on Ivan Steiner’s 1972 theory of process loss. But psychologist and University of San Diego Professor of Management, Jennifer Mueller uncovered “relational loss” as the third element of why individuals’ efficiency decreases in larger teams.

Relational loss is when you feel as if you are receiving less and less support as teams get larger. This includes emotional support, assistance in performing work and overcoming setbacks, and informational support to help solve problems. Think about your worst workdays — and how much harder it is without a shoulder to lean on or someone to help you out of a jam.

Steiner’s theory was missing the fact that when you’re on a team, you regularly interact and spend time with each other every day. Mueller suspected that the deteriorating quality of those multiplying links contributed to weaker individual performance. Just think about how the more friends you amass on Facebook, the weaker those ties usually are.

Studying 212 knowledge workers throughout multiple companies in teams ranging in size from three to nineteen, Mueller analyzed data derived from performance evaluations, given by both peers and team leaders, as well as questionnaires on motivation, connectedness, and coordination. She found, as she says, “compelling evidence for relational loss — it loomed larger than you might expect given how much emphasis is given to coordination.” People’s perception of support decreased as team size increased and this relational loss accounted for poorer individual performance.

The price of relational loss is paid with feelings of isolation and chronic stress, which harms cognitive ability and causes poorer performance. Mueller remarks on how tremendous amounts of stress in larger teams were particularly striking, with one person even calling work a “death march”:

4 Effective ways to address these size-related losses and operate as small teams:

To steer toward sweeter pastures of engagement and productivity at work, manage the links. Here are a few ways for you and your troupe to start receiving the benefit of smaller teams:

Figure out the right communication tools: The cult of productivity is often inwardly focused on the personal while neglecting the needs of the collective. Find and use “generous” tools and processes that lower coordination cost and save other people time as well.

This may mean finding friendlier collaboration apps or changing how you participate in and run meetings. iDoneThis, for example, is a slow web tool that allows you to stay in sync with your team, creating meaning and connection through an adaptable cadence of communication rather than causing frustration and guzzling time.

Make teams feel smaller: Get chummy with your coworkers and get to know each other better. That holiday party or happy hour may seem like some silly work event, but outings and work trips allow you to build a rapport and have some fun.

Be adventurous, explore your office or virtual watercooler, and find new ways to connect, like Zappos’s “face game” (upon logging into the computer system, you guess the name of a coworker whose face pops up and then see his or her bio).

Become radically transparent:  Transparency helps prevent behavior such as social loafing and free-riding, which rely on the fact that there’s somewhere easy to hide, and power plays, which rely on hoarding knowledge like an information miser.

The often-disregarded half of your job, other than doing your work, is communicating about it. Tell people about what you do, and make knowledge accessible, visible, and therefore collective by writing things down, chronicling decisions and processes, and being inclusive.

Take a page from the amazing Buffer team and make transparency more than a buzzword. They share a wealth of information about each other, from salaries to daily learnings and progress, to how much sleep everyone gets. The result is a positive, protective shield against relational loss.

Put on your connecting and troubleshooting capes: Instead of shrugging your shoulders, stretch beyond the limits of a particular role to participate in an all-hands approach. Use your genius skills to save the day by figuring out how best to connect needs to abilities when someone looks like they need help.

And in already-large teams, Professor Mueller suggests putting a person in the non-leadership role of a team troubleshooter. This is someone who steps in when people encounter obstacles while allowing them the psychological freedom to talk about their problems.

Give frequent feedback to each other:  Don’t isolate feedback to some twice-a-year supervisory formality. Get the conversation flowing among everyone in your group to help strengthen the connections between individual effort and performance, which get swallowed up in the crowd through motivational loss.

Ask questions, show your teammates gratitude and appreciation, and respond to distress signals.  Creating a high frequency feedback culture, like the one at Zapier — where there are daily discussions on what everyone gets done and monthly one-on-ones — helps everyone be better at their jobs.

We could all learn a lesson from thinking smaller. Putting some thought and effort into how to communicate better, opening up channels for more conversations, and strengthening supportive and meaningful emotional connections make work about creating something great with your teammates instead of fading away on some stressful, lonely death march.

P.S. If you liked this post, you might enjoy our Buffer Blog newsletter. Receive each new post delivered right to your inbox, plus our can’t-miss weekly email of the Internet’s best reads. Sign up here.
Photo credit: anggatantama