Psychological theories often feel a bit too complicated for me (I’m sure there’s a theory that explains why that is) but I’ve come across a few that are simple enough to understand and that I think of often, particularly when dealing with other people.

I thought it might be fun to take a brief look at a few psychological theories that are especially relevant for business, marketing, leadership and overall communication skills. Keep in mind I’m no professional psychologist, so if you’re keen to find out more about these, definitely dig deeper into the research about each one.

Professor Robin Dunbar is an evolutionary psychologist who developed a model for predicting social factors about primates, based on brain size. Working from the brain expansion over time in primates (including humans), Dunbar was able to match brain size to social behaviors:

Robin Dunbar used the volume of the neocortex – the ‘thinking’ part of the brain – as his measure of brain size, because this accounts for most of the brain’s expansion within primates.

In particular, he looked at the size of social groups, and the number of more intimate grooming partners for different primate species:

For instance, chimps belong to social groups comprising about 50 individuals, but they have only two or three grooming partners. 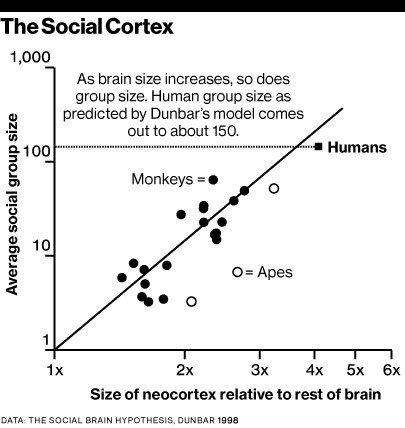 Based on the size of neocortex, Dunbar was able to very accurately predict the size of a social group and the number of grooming partners of various primate species. 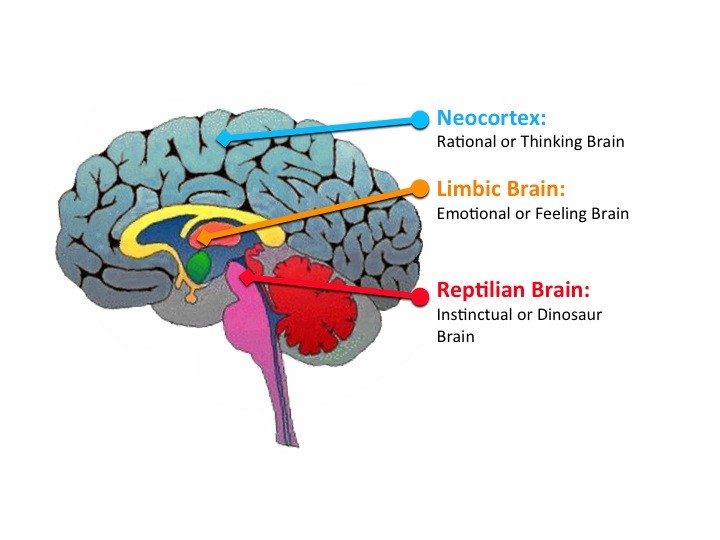 When he applied this to humans, Dunbar found that most human social groups are made up of around 150 people:

… the literature suggests that 150 is roughly to the number of people you could ask for a favor and expect to have it granted.

Our more intimate clique size usually includes around 12 people. That 150 number is the important one, though. It’s (roughly) the maximum number of people that most of us can manage a social connection with. Anything above this is a struggle for our brains, so people drop off the bottom of our list as we add more to the top of it. Here’s another way Dunbar describes it:

Putting it another way, it’s the number of people you would not feel embarrassed about joining uninvited for a drink if you happened to bump into them in a bar.

Writer Rick Lax actually took up Dunbar’s number as a challenge and tried to prove it wrong. In his piece for Wired, Lax explains what he learned from the attempt:

In trying to disprove Dunbar’s number, I actually proved it. I proved that even if you’re aware of Dunbar’s number, and even if you set aside a chunk of your life specifically to broaden your social capital, you can only maintain so many friendships. And “so many” is fewer than 200.

The experiment also encouraged Lax to pay more attention to those few, close connections he has:

I walk away from this experiment with a newfound respect for 1) British anthropology and 2) My real friends. There aren’t too many of them, I now see. So I better treat them well.

Dunbar’s number is particularly interesting in terms of marketing, brand-building and social media. If you keep in mind that each person you interact with only places around 150 people total in their “emotional connection” bucket, it can make interactions much easier. Rather than being frustrated or surprised that your customers don’t “connect” with your brand, think about this: each emotional connection they offer to your company is one they can’t offer to a true friend or family member. So when they do, that’s a big deal.

You might think that Dunbar’s number is in direct opposition to the idea of social media. In fact, the number is the whole reason that the social network Path limits its users to 150 connections. However, social media also takes advantage of weak ties – the friend-of-a-friend or six-degrees-of-separation way that you might have come to know new friends on Twitter or Facebook.

In Morten Hansen’s book Collaboration, he describes how both weak ties and strong ties are crucial – but that the weak ties created through networking and social media were often the key to new opportunities.

“Research shows that it is not the size – the sheer number of contacts maintained by a person – that counts. Rather, it’s the diversity of connections – the number of different types of people, units, expertise, technologies and viewpoints – that people can access through their networks.”

Weak ties help here because they “form bridges to worlds we do not walk within,” whereas strong ties are most likely people in worlds we already know.

Hanlon’s Razor is an adage that goes like this:

Never attribute to malice that which is adequately explained by stupidity.

If you’ve ever heard of Ockham’s Razor (or Occam’s Razor), you might know that a razor in philosophy is designed to help us strip away unlikely explanations for a phenomenon. So, essentially, something happens (a phenomenon) and we try to explain it with a hypothesis (possible explananation). A razor helps us to eliminate the unlikely hypotheses until we’re left with the most probable explanation of the phenomenon.

Although Hanlon’s Razor is quoted using the word “stupidity,” I prefer to use “ignorance,” since not having all the information can often be the issue where we might assume it’s stupidity (i.e. lack of good judgement).

The idea is that when someone appears to be treating you with malice, you should always dig deeper to see if ignorance could be the cause, instead.

Have you ever received an email from a coworker or colleague that seemed to critique you or attack your idea? Your first reaction was probably to attribute it to malice – but if you look more closely, you might find it’s simply a misunderstanding.

“If I can’t think of at least three different interpretations of what I received, I haven’t thought enough about what it might mean.” — Jerry Weinberg

An example that illustrates this well is looking at the movie Finding Nemo: If you remember, Nemo is kept in a fish tank by a dentist, separating him from his father and resulting in a movie-length search to save him. The dentist, however, isn’t acting with malice: He actually thinks he’s doing Nemo a favor by keeping him “safe” in the tank.

Likewise, the dentist’s niece tends to be rough with fish, misunderstanding how her actions are dangerous. Although it seems like malice to the fish, she’s actually just ignorant of the consequences of shaking a fish around roughly in a plastic bag.

The next time you’re not quite sure how to interpret that ambiguous tweet or email, remember Hanlon’s Razor and consider giving the sender the benefit of the doubt.

This last theory can be useful for interacting with anyone about their job: colleagues, employees, or even a friend or spouse. The theory, published by psychologist Frederick Herzberg in 1959, suggests that job satisfaction and dissatisfaction are actually measured in different ways, rather than being two ends of the same scale.

The theory says that job dissatisfaction comes from “hygiene” factors such as the physical work environment, job security and salary. Job satisfaction, however, comes from “motivating” factors like enjoying the work itself, feeling a sense of achievement and having responsibility.

Herzberg spent five years conducting research into job satisfaction, due to the increase of indications of job dissatisfaction, like strikes and employees filing grievances.

What we can learn from his research is that mitigating factors that lead to job dissatisfaction won’t necessarily lead us to job satisfaction. So, a high-paying job that offers great benefits and a comfortable working environment could still make us feel lousy if we don’t have any responsibility at work, and we never feel a sense of achievement.

Conversely, feeling great about the work you do and being recognized for it won’t offset the issues of being paid poorly, or feeling uncomfortable about your working environment.

This theory gives us a lot to think about in terms of understanding why certain companies are perceived as good places to work and investigating how best to motivate a team or individual at work. I think this theory also can be really powerful for those times when we listen to a friend, colleague or employee’s complaints about work. I’ll never again say something like, “but you get paid so well!” expecting them to be happy about their job.

There are loads of theories and concepts like these which are useful to know. Do you know a good one? Let us know in the comments.

If you liked this post, you might also like The Science of Emotion in Marketing: How Our Brains Decide What to Share and Whom to Trust and The Science of Failure: Why Highly Successful People Crave Mistakes.