The list is the origin of culture. Wherever you look in cultural history, you will find lists. – Umberto Eco

When I was a kid, I read a book called The Listmaker. It’s about a young girl who uses lists to organize and make sense of her life. At the time I didn’t read any more into it besides the fact that this was an odd hobby for a pre-teen girl to spend so much time on.

Now, although I don’t remember the book that well, I do see much more significance in the humble list—especially after researching where they come from and why we make lists.

As I researched this post I realised how hard it is to pinpoint the origin of something as simple and widespread as the list (to-do or otherwise), but I did find out some interesting stories about how lists have been used in the past and why we find them useful in everyday life.

Why do we make lists as humans in the first place?

Philosopher and novelist Umberto Eco is a big fan of lists and has some fascinating ideas about why they’re so important to humans:

The list is the origin of culture. It’s part of the history of art and literature. What does culture want? To make infinity comprehensible… And how, as a human being, does one face infinity? How does one attempt to grasp the incomprehensible? Through lists…

Umberto explained in an interview that lists are often seen as relics of primitive cultures—simplistic devices that don’t belong in our modern day and age. However, the simple form of the list prevails again and again over time, because, as Umberto says, it has “an irresistible magic.”

When we struggle to express ourselves, we use lists. Like Umberto says, lists help us to make sense of the world around us. We create lists of the sights we see on vacation, the places we want to visit, the food we need to buy at the grocery store, and the tasks we need to get done. It’s a simple habit of increasing our day to day productivity.

We pack all the madness and ambiguity of life into a structured form of writing. In short making lists is a great way to increase our overall happiness and feel less overwhelmed.

Not only that, but we also form and challenge definitions of the things around us by making lists of their characteristics. For instance, if we were to describe an animal to a child, we would do so by listing characteristics like color, size, diet and habitat. Regardless of whether this matches the scientific definition of the animal or not, that’s how we make sense of it.

Benjamin Franklin, the godfather of the to do list?

Benjamin Franklin is a great example of someone known for using lists to encourage his own self-improvement. He famously detailed a thirteen-week plan to practice important virtues such as cleanliness, temperance, etc. Each day he tracked his progress on a chart.

Benjamin also set himself a strict daily routine, which included time for sleeping, meals and working, all set for specific times of the day. Unfortuantely, the demands of his printing business made it difficult for him to always stick to his routine, but this image shows how he aimed to spend his time: 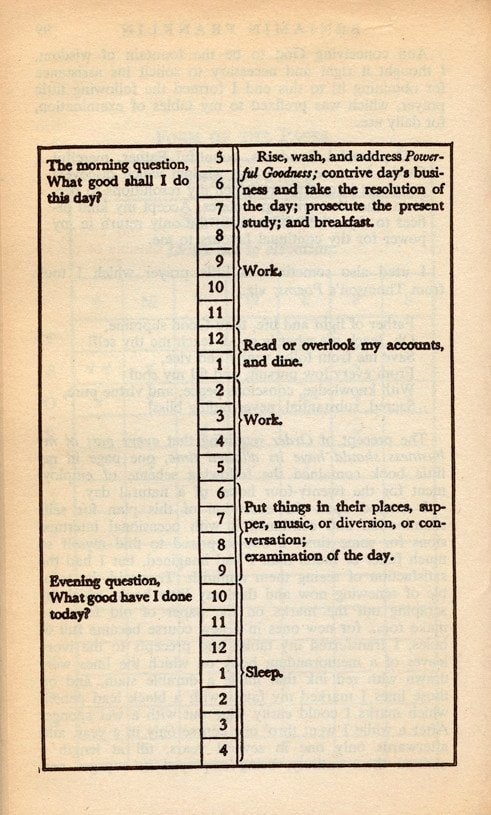 These days, we use lists for productivity as much as anything else: shopping lists, reminders, planning for events, and the to-do list are all variations on a productivity-based list that we use to help us get past procrastinating.

The to-do list in particular is one that we spend a lot of time and energy on perfecting. Somehow, we don’t seem to struggle when it comes to making a shopping list and buying everything on it, but getting the tasks on our to-do list done is a whole other ball game.

Looking at the history of lists and how they’re used, we can glean some insights about how to create a to-do list we can actually complete.

1. Break projects into tasks, don’t succumb to the Zeigarnik effect

We kind of have a reminder system built-in to our minds that nags us about unfinished tasks, called the Zeigarnik effect. It sounds pretty cool that we already have this, but it’s actually not that reliable or healthy for us. 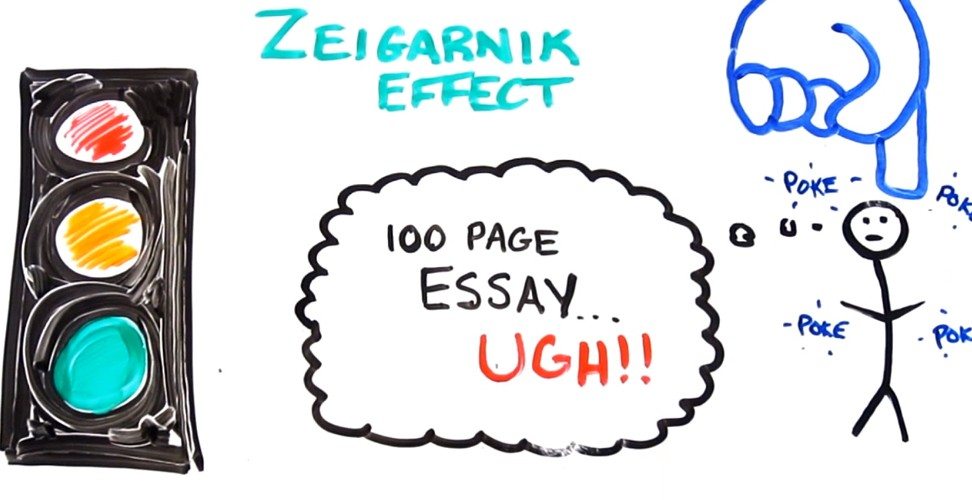 What really happens is that there’s a disconnect between our conscious and unconscious minds—the unconscious mind can’t plan how to finish the task, but it gets annoyed with the feeling of it being unfinished. To shake off that feeling, it nags the conscious mind with reminders about the task—not to finish it, but simply to encourage us to make a plan.

If you’ve heard of David Allen’s GTD method, you’ll be familiar with his concept of “next steps,” which is pretty much the same thing. It’s the process of breaking down a project or task into smaller tasks, and planning which one will be the next step towards completing the whole thing.

This abates the nagging of the unconscious brain, as it’s satisfied that at some point we’ll get onto that task, and we know exactly how we’ll do it.

Maria Popova at Brain Pickings says the essentials of creating these do-able next steps are to make “a few very specific, aactionalbe, non-conflicting items.”

Maria’s post on the history of the to-do list also describes the story of a psychologist who gave a talk at the Pentagon about managing time and resources. Before the talk began, the psychologist asked everyone in the group to write a summary of their strategic approach in 25 words.

Apparently, 25 words was too little for the men to express their strategies, and the only response came from the single woman in the group, whose summary read as follows:

First I make a list of priorities: one, two, three, and so on. Then I cross out everything from three down.

I’ve heard this approach suggested before in various places, and it always reminds me of the CEO I worked with at my previous company, who had a Post-It on his desk that read, “prioritize until it hurts.” in other words, learning the powerful skill of saying no. I’m not sure if he ever managed to do that, but I liked the approach.

To-do lists invariably crop up when we have so many things to do that we can’t keep track of them all in our heads (Aha! We’re back to Umberto’s thoughts on how lists help us to create order from the chaos of our lives!). Which means that we end up with lists far too long for us to complete.

Prioritizing ruthlessly seems to be the only way to actually get done what’s most important in the little time that we have.

Here’s another cool story of how to-do lists evolved in the workplace:

Almost 100 years ago, the President of the Bethlehem Steel company in the USA was Charles M Schwab. His company was struggling with inefficiency and Schwab didn’t know how to improve it, so he called in Ivy Lee, a well-known efficiency expert at the time.

Lee agreed to help the company, with his fee being whatever Schwab felt the results were worth after three months.

Lee’s advice to each member of the company’s management team was to write a to-do list at the end of each day, which consisted of the six most important tasks to be done the following day. Then they were told to organize the list based on the highest priority tasks.

The next day, the employes worked through the list from top to bottom, focusing on a single task at a time. At the end of the day, anything left on the list would get added to the top of tomorrow’s list when the employees once again planned for the following day.

As the story goes, the company was so much more efficient after three months that Schwab sent a check to Lee for $25,000.

In your own planning, you can take Lee’s advice for free and use the night before to plan your workday. Setting out the most important tasks you want to complete the following day will help you to avoid time-wasters and distractions by knowing what to work on immediately.

4. Be realistic in your planning

Sometimes it’s nice to know that even our great heroes are fallible. This story about Benjamin Franklin’s struggles to keep up with his daily to-do list shows how important it is to be realistic about how much time we have and what our priorities are.

Franklin was known to be a meticulous tracker of his daily routine and his work towards the virtues he prioritized.

Unfortunately, the demands of his business meant that he didn’t always keep up with his ideal daily routine. He often got interrupted by clients and had to ignore his schedule to meet with them.

He also noticed that some of the virtues he aspired to practice, such as frugality—not wasting anything—took up too much time for him to live life as he wanted to. Preparing his own meals and mending his own clothes all the time, for instance, meant that he didn’t have enough time for business or his side projects.

The result of these conflicting priorities was unhappiness over not completing the tasks he set for himself. As a result, he had to re-prioritize, which is something we should keep in mind.

If we’re struggling to complete our to-do lists on a regular basis (we’ve all been there at some point!), we need to make a change to the list—make it more realistic.

Although a to-do list can be infinite, our time is not. We need to match the tasks we require of ourselves to how much time and energy we can afford to spend on them. This is where prioritizing can really come in handy, as well.

Starting to develop your own, personal daily routine is one of the most powerful ways to become a great list maker. You might find some inspiration from these 7 famous entrepreneurs and their routines.

Find a way that works for you

As with pretty much any kind of lifehacking or productivity topic I write about, individual mileage will vary. We all need to take into account our unique situation when experimenting with advice like this. For me, prioritizing and planning the night before has really helped. For you, being realistic might be more useful.

As a last example, I found a to do list from Johnny Cash. This wouldn’t necessarily be one we’d advocate to help you become more efficient. But then again, we can’t argue with Johnny Cash’s success, can we? 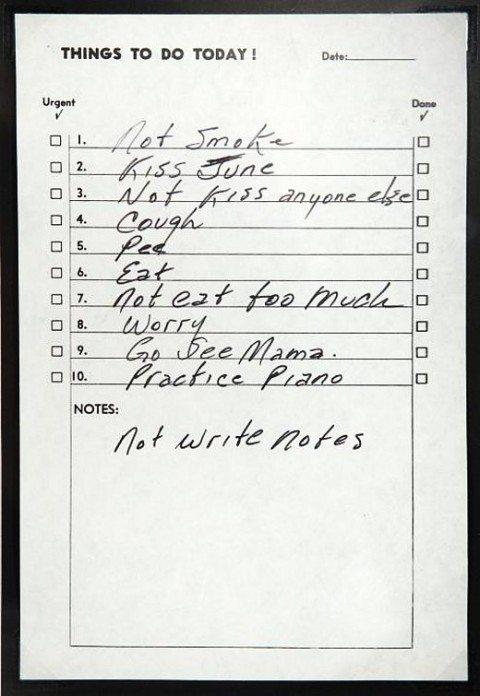 How is your own relationship with to do lists? Let us know what works for you in the comments below.

PS: If you enjoyed this post, you might also like our recent article on 7 Simple productivity tips you can apply today, backed by science and Buffer’s most popular post ever on improving your happiness: 10 Simple Things You Can Do Today That Will Make You Happier, Backed By Science