We’ve looked at a few different strategies to help remember the names of people you meet on the Buffer blog before, but there’s lots to say about memory.

It turns out that science is continually finding new connections between simple things we can do every day and an improvement in our general memory capacity.

Memory is a complicated process that’s made up of a few different brain activities. Here’s a simplified version to help us understand how the process takes place:

Our brain sends signals in a particular pattern associated with the event we’re experiencing and creates connections between our neurons, called synapses.

If we didn’t do anything further, that memory would fall right out of our heads again. Consolidation is the process of committing it to long-term memory so we can recall it later. A lot of this process happens while we’re sleeping, as our brains recreate that same pattern of brain activity to strengthen the synapses we created earlier.

This is what most of us think of when we talk about memory, or especially memory loss. Recalling the memory is easier if it’s been strengthened over time, and each time we do so, we run through that same pattern of brain activity again, making it a little stronger.

Memory loss is a normal part of aging, but that doesn’t mean we can’t take action to slow it down a little. Let’s take a look at some of the ways research has found to keep our memories around as long as possible.

1. Meditate to improve your working memory

Working memory, which is a bit like the brain’s notepad, is where new information is held temporarily. When you learn someone’s name or hear the address of a place you’re going to, you hang on to those details in working memory until you’re done with them. If they’re not useful anymore, you let go of them entirely. If they are, you commit them to long-term memory where they can be strengthened and recalled later.

Research has shown that participants with no experience in mindfulness meditation can improve their memory recall in just eight weeks. Meditation, with its power to help us concentrate, has also been shown to improve improve standardized test scores and working memory abilities after just two weeks.

Why does meditation benefit memory? It’s somewhat counterintuitive. During meditation, our brains stop processing information as actively as they normally would.

In the image below you can see how the beta waves (shown in bright colors on the left), which indicate that our brains are processing information, are dramatically reduced during meditation (on the right).

Whether caffeine can improve memory if taken before learning something new is debatable. Most research has found little-to-no effect from ingesting caffeine prior to creating new memories. One recent study, however, found that taking a caffeine pill after a learning task actually improved memory recall up to 24 hours later.

Participants memorized a set of images, and were later tested by viewing the same images (targets), similar images (lures) and completely different images (foils). The task was to pick out which were the exact pictures they had memorized, without being tricked by the lures which were very similar. This is a process called pattern separation, which, according to the researchers, reflects a “deeper level of memory retention.” 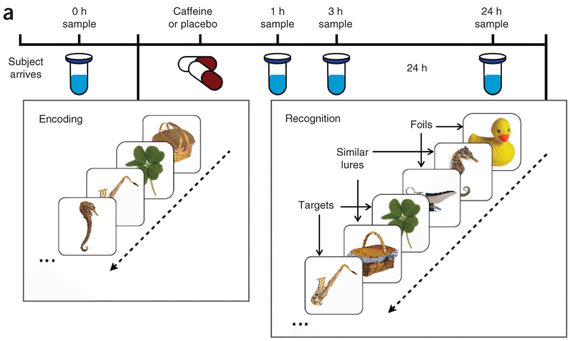 The researchers in this study focused on the effects of caffeine on memory consolidation: the process of strengthening the memories we’ve created. This is why they believe there were effects when caffeine was ingested after the learning task, rather than before.

Another diet-related effect on memory is the mounting research that eating berries can help to stave off memory decline.

A study from the University of Reading and the Peninsula Medical School found that supplementing a normal diet with blueberries for twelve weeks improved performance on spatial working memory tasks. The effects started just three weeks in and continued for the length of the study.

A long-term berry study that tested the memory of female nurses who were over 70 years old found that those who had regularly eaten at least two servings of strawberries or blueberries each week had a moderate reduction in memory decline. (The effects of strawberries might be debatable, though, since that study was partly funded by the California Strawberry Commission and another study focusing on strawberries suggested that you’d need to eat roughly 10 pounds of strawberries per day to see any effect).

More research is needed in this area, but science is getting closer to understanding how berries might affect our brains. In particular, blueberries are known for being high in flavanoids, which appear to strengthen existing connections in the brain. That could explain why they’re beneficial for long-term memory.

4. Exercise to improve your memory recall

Studies in both rat and human brains have shown that regular exercise can improve memory recall. Fitness in older adults has even been proven to slow the decline of memory without the aid of continued regular exercise.

In particular, studies shown that regular exercise can improve spatial memory, so it’s not necessarily a way to improve all kinds of memory recall.

Of course, the benefits of exercise are numerous, but for the brain in particular, regular exercise has been shown to improve cognitive abilities beyond memory. So if you’re looking for a way to stay sharp mentally, taking a walk could be the answer. See how a quick walk ignites the brain in the scan below:

Another easy method to try that could improve your memory is chewing gum while you learn new things. There’s been some contradictory research around this topic, so it’s not a solid bet, but a study published last year showed that participants who completed a memory recall task were more accurate and had higher reaction times if they chewed gum during the study.

One reason that chewing gum might affect our memory recall is that it increases activity in the hippocampus, an important area of the brain for memory. It’s still unclear why this happens, though. 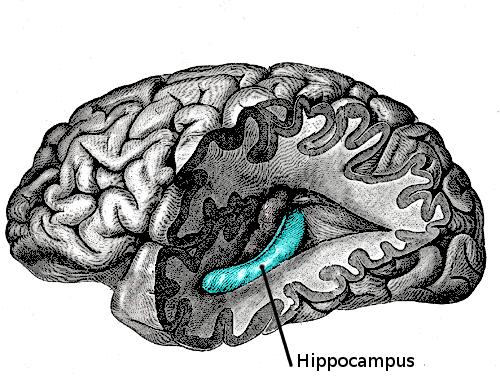 Another theory focuses on the increase of oxygen from chewing gum, which can help with focus and attention. This could mean we’re creating stronger connections in the brain as we learn new things while chewing gum. One study found that participants who chewed gum during learning and memory tests had higher heart rate levels than control groups, which can also lead to more oxygen flowing to the brain.

6. Sleep more to consolidate your memories

Sleep has proven to be one of the most important elements in having a good memory. Since sleep is when most of our memory consolidation process occurs, it makes sense that without enough sleep we’re going to struggle to remember the things we’ve learned. Even a short nap can improve your memory recall.

In one study, participants memorized illustrated cards to test their memory strength. After memorizing a set of cards, they had a 40-minute break wherein one group napped, and the other stayed awake. After the break, both groups were tested on their memory of the cards – the group who had napped performed better:

Much to the surprise of the researchers, the sleep group performed significantly better, retaining on average 85 percent of the patterns, compared to 60 percent for those who had remained awake.

Research indicates that when memory is first recorded in the brain—in the hippocampus, to be specific—it’s still “fragile” and easily forgotten, especially if the brain is asked to memorize more things. Napping, it seems, pushes memories to the neocortex, the brain’s “more permanent storage,” preventing them from being “overwritten.”

Not only is sleep after learning a critical part of the memory creation process, but sleep before learning something new is important as well. Research has found that sleep deprivation can affect our ability to commit new things to memory and consolidate any new memories we create.

Have you tried any of these methods for improving your memory? What works best for you? Let us know in the comments.

If you liked this post, you might also like Inactivity and the Brain: Why Exercise is More Important than Ever and The Secret to Creativity, Intelligence, and Scientific Thinking: Being Able to Make Connections.