Here is a first for a report we’ve never done before. We started publishing our Buffer for Business metrics for a few months now, however we’ve not done this for the Buffer Awesome Plan (our $10/mo, more consumer focused pricing plan).

This is by far also still making up the biggest chunk of our monthly revenues, at roughly 76% coming from the Awesome plan.

Here is a breakdown of how it performed this month:

Sources (Which limits caused them to upgrade, if any):

(Note: Part of this we started tracking half-way through December, so some of the data is incomplete here)

Platform ( Where do they come from ):

(Note: The same as above applies, the original sign-up sources for Awesome plan suers isn’t quite complete)

Metrics (What else do we know about these upgrades): Age 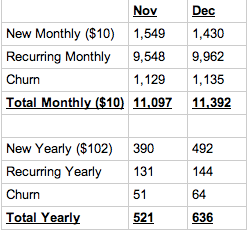 26% of our Awesome upgrades in December are on annual plan, versus an average of 19% in the past 6 months. While growth of paying users were almost flat in December, we managed to grow the Awesome revenue by 2.7% by encouraging more users to go on the annual plan. We will pay more attention to the churn rate of annual users in the coming months.

Many upgrade from just the dashboard:

Further insights that can be interesting:

We’re definitely seeing slower growth on the Awesome plan, compared to the Business plans, so it’ll be good to try a few experiments to help Awesome revenues to grow in similar fashion.

We’d love to answer any questions on the above report or any other thoughts about how we’re doing things at Buffer.