Have you heard the good news? You can now share, schedule and measure your Pinterest Pins through Buffer!

Buffer Awesome and Buffer for Business customers can:

We hear this question a lot on the Buffer blog. We’ve been fortunate to find some neat ways to improve social media marketing on Facebook, Twitter, LinkedIn, and more, but Pinterest?  It’s kind of uncharted territory for a lot of us.

(Just so you know, Buffer doesn’t integrate with Pinterest yet, but you can be sure we’ll be the first one on their doorstep when the API opens up for us to do so!)

In our experience, there is a growing interest in Pinterest marketing, Pinterest research, Pinterest stats and tips. So, here it all is. I found some really interesting data and science on creating the perfect pin, gaining the most repins and followers, understanding the Pinterest mindset, and much more.

Ready to go? Let’s start right off with a whopper of a stat.

Do you have a Twitter marketing strategy? I imagine you do. Could you be reaching more people on Pinterest? As of this year, yes.

compared social media usage in 2012 and 2013 to see how five of the top social networks have grown.

Facebook remains far and away the most popular social network. But Pinterest took the largest leap. More than one-fifth of U.S. adults use Pinterest—a greater number than Twitter or Instagram, and a 6 percent jump from a year ago. 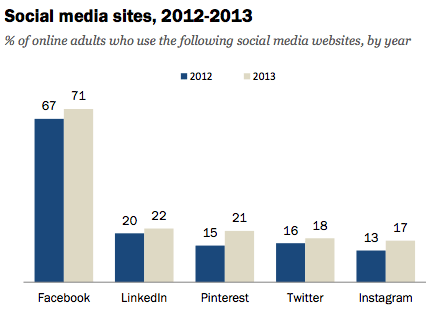 In addition  to these stats and numbers, Pew also released information on the overlap among users of major social networks. The below matrix shows the percentage of Pinterest users who also use Twitter, Instagram, LinkedIn, and Facebook.

Here are some other interesting stats about Pinterest, including the oft-cited gender split:

One of their most recent posts delves into the mindset of the user. Basically, you can boil

Notice anything familiar about the makeup of these mindsets? People start by looking and browsing, they find some inspiration, they narrow down their choices, they decide.

Take a closer look at these modes and you start to see something familiar: the modes mirror the customer journey.

This shows a great opportunity for businesses and brands to engage with customers at each step of the buying process. Your pins are likely to be seen by those just getting introduced to what you offer and those about to pull the trigger.

Another unique aspect of the Pinterest experience is the psychology behind what makes people pin. Nir Eyal, writing at Psychology Today, explains that Pinterest users need only to feel, not think, when pinning and sharing.

On Pinterest, you are simply sharing your tastes and preferences rather than taking on the cognitive load of creating content. This feeling vs. thinking tension could explain a bit why marketing efforts more often fall to the thinking networks of Twitter and Facebook rather than the feelings on Pinterest.

Their analysis was featured on Wired.com, along with “the perfect image:” this photo of a cucumber, tomato, and onion salad from Paula Deen, which has been repinned 307,000 times.

Paula Deen’s photo encompasses all eight of Curalate’s suggestions for creating a popular Pinterest image. Here are their five best practices, based on the images that get the most pins and repins.

Hubspot’s Dan Zarella, whom we often cite for his amazing social media data, pulled some numbers on how to get more pins and repins on Pinterest.

His analysis of more than 11,000 pinned images led to a lot of neat observations (see the bottom of this post for the full infographic). One of those observations was the effect of image height on repins. Zarella’s takeaway: Taller images are more repinnable.

Vertical images are most definitely the preferred style on Pinterest. (Tip: The free design tool at Canva comes with a premade Pinterest template that is 736 pixels wide by 1103 pixels tall.)

While we’re on the topic of images (and it’s hard not to be on this topic when you’re talking about Pinterest), the folks at Copyblogger have some excellent advice on how to optimize your Pinterest traffic for conversions. Their tips come from experience and experimentation. As they noticed an uptick in Pinterest traffic, they began trying out new methods to better optimize these visits. Here are a few of their tactics:

What distinguishes Pinterest from other social networks? DIY and unicode hearts.

A study at Georgia Tech University collected data on over 2.9 million pins and 989,000 pinners in order to answer questions about what drives activity on Pinterest, the roles that gender plays, and what distinguishes Pinterest from other social networks.

One of the most interesting takeaways from their study—along with the notable discovery that being female means more repins but fewer followers—was the words most common and identifiable for Pinterest users. Put another way, these are the words that resonate the most on Pinterest.

(Note: The values read left to right and top to bottom, rather than a column at a time.)

“DIY” and the symbol for a unicode heart (<3) were the top two Pinterest words. Take particular note, too, of the top verbs: use, look, want, and need.

These verbs reflect that Pinterest is more about “things” than any of the other social networks. Keeping this in mind could help you tailor your Pinterest marketing message so that it speaks the language of Pinterest.

The most important factors in getting more Pinterest followers

A Pinterest study from the University of Minnesota gathered more than 3 million pins and collected data on more than 45,000 users to come to some conclusions on how to grow your followers and what categories are most important.

The study took into consideration 38 different factors that may attract an audience on Pinterest. The three most important factors in getting more followers:

After these three profile features, the next three most important factors were the categories in which you create pins. The top three categories were:

Of note in the chart above is that diversity of pins (marked by the blue bar in the chart) is nearly as important as pinning to the top categories. This would imply that a well-rounded set of pins could be just as valuable as seeking out the most popular categories.

The Minnesota research team summed up the findings with this blueprint:

To attract lots of followers, you should: follow lots of other pinners, create lots of boards and pin a lot, post on popular topics, and don’t concentrate on too few topics.

Also in the University of Minnesota study, researchers found which categories were most popular on Pinterest and how this varied by gender.

Food and drink was the number one overall category and the top category for both men and women. Here are the charts:

Brands could learn from the popularity of certain categories here, both in terms of overall popularity and in popularity by gender.

For instance, the top categories for men are not the stereotypical sports, technology, and cars but rather photography, art, design, and home decor. If you have a male-oriented product in one of these spaces, you may take a longer look at investing in Pinterest marketing.

The best time to pin during the day is 2 to 4 p.m. Eastern

As with any advice on the ideal time to post, you’ll want to test this for yourself to see when your pins tend to get the most activity. In general, you can aim for a time when as much of your audience is online (and therefore more likely to see your latest pins) or when you’ve historically received the most engagement with what you’ve pinned.

Give a try and set up your Pinning schedule with Buffer:

The basics of Pinterest are probably quite clear to you: Create boards based on different topics, add visual content to the boards, pin and repin, repeat. Brands use Pinterest in much the same way as individuals—finding and sharing beautiful, inspiring, valuable things. Beyond that, though, there are a few Pinterest features that might make even more sense for businesses to check out.

Businesses are encouraged to get verified through Pinterest’s business section, and doing so will open up a few cool tools, including analytics. With Pinterest analytics, you can see data from pin activity on your website and on your Pinterest boards. Learning what pinners like (through data like Most Repinned and Most Clicked) can help you tailor your pins for more conversions.

Pins for movies, recipes, articles, products, and places have the option of additional information. For instance, pins of products can show pricing, availability, and where to buy.

Rich pins require approval from Pinterest along with a bit of code that might best be handled by a developer.

Use secret boards to launch, debut, and plan

Pinterest allows you to create private boards that you can add to and curate just like your public ones. Many businesses have taken this feature and used it to build out an awesome board before pushing it public for all to see. This could be an ideal way to build your Pinterest profile from scratch and make a big debut.

Of course, what would a post on Pinterest be without some visual goodies? Here are five detailed infographics on various aspects of Pinterest marketing and best practices.

A great place to start with Pinterest marketing is deciding if it is for you or not? Intuit put together a flowchart to help you decide whether your business should be on Pinterest.

Here is the full view of Dan Zarella’s insights into Pinterest marketing.

What makes Pinterest so addictive? Column Five Media attempts to answer that question with this infographic.

For a complete look at the demographics of Pinterest, Modea created this infographic that shows who exactly you can expect to find there.

The recipe for the perfect Pinterest pic (as discussed above) is also available as an infographic. Here’s the goods from Curalate.

I’d love to hear how you are using Pinterest for your marketing efforts and whether any of the above data and research has worked for you. If scheduling to Pinterest is part of your strategy, we’d love to help you out with that element at Buffer. You can set up a Pinterest schedule right now:

As for those who have yet to get into Pinterest marketing, is it something you’re more likely to consider now? I‘d be thrilled to chat about it in the comments.