One of the things I fuss about a lot (especially at Buffer) are words—very simple words, in fact. Should it say “Hi” or “Hey?” Should it be “cheers” or “thanks?” How about “but” or “and?”

There are many occasions when Joel and I sit over one line and change it multiple times, until we feel it really sits right. This is partly to improve our metrics for click rate and others. It is also to simply create the right emotion. The one key question we ask ourselves is:

“How does this make you feel?”

The question might sound very obvious. And yet, it’s a very different question to say for example “Which message do you want to send?” or “What is the content of this announcement?” By always focusing on how it will make someone feel whenever we write even a single line, we immediately improved the amount of responses we got from our users.

Recently we explored how much sleep do we really need to work productively. Let’s do the same with language. We’ll dig in to how our brain works and expose some of the most persuasive words in english:

Our brain while listening to words

Recently, a lot of the longstanding paradigms in how our brain processes language were overthrown. New and cutting edge studies that produced quite startling and different results. The one study I found most interesting is UCL’s findings on how we can separate words from intonation. Whenever we listen to words, this is what happens:

“Words are then shunted over to the left temporal lobe [of our brain] for processing, while the melody is channelled to the right side of the brain, a region more stimulated by music.”

So our brain uses two different areas to identify the mood and then the actual meaning of the words. On second thought, what still doesn’t quite make sense is why we can even distinguish “language” so distinctly from any other sounds.

The UCL team tried to find out about exactly this. They played speech sounds and then non-speech sounds, that still sounded similar to speech to people. While measuring their brain activity, they found something fascinating:

“Speech was singled out for special treatment near the primary auditory cortex.”

In short, our brains can magically single out language from any other sounds and port it to the right “department” in our brain to give it meaning.

This graphic also gives a great overview about how our brain process language: 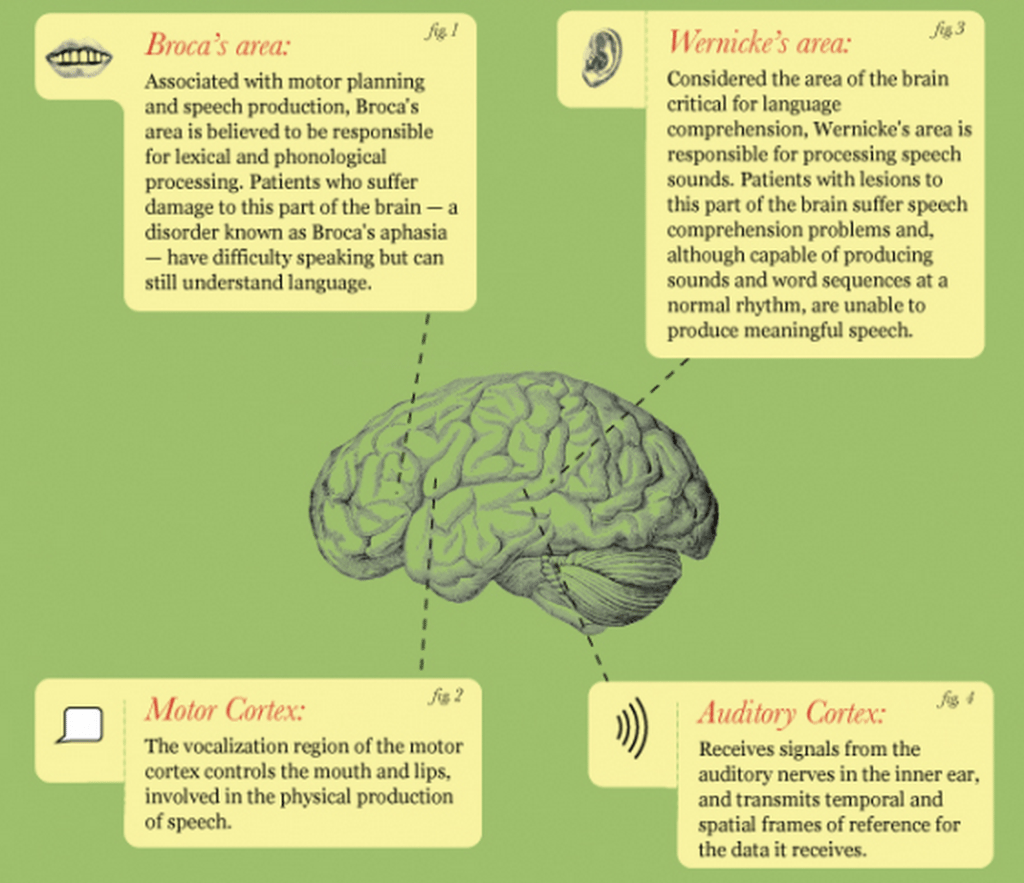 So intonation and actual wording matters, but what is the split?

You’ve probably heard the above many times before. It’s one of the longest standing study results that has become a synonym for how language works. Only in recent years have people explored again what the contents of that study were.

The study, which dates back to 1967, had a very different purpose and wasn’t at all about defining how we process language:

“The fact is Professor Mehrabian’s research had nothing to do with giving speeches, because it was based on the information that could be conveyed in a single word.”

Here is what actually happened that triggered the above result:

“Subjects were asked to listen to a recording of a woman’s voice saying the word “maybe” three different ways to convey liking, neutrality, and disliking. They were also shown photos of the woman’s face conveying the same three emotions. They were then asked to guess the emotions heard in the recorded voice, seen in the photos, and both together. The result? The subjects correctly identified the emotions 50 percent more often from the photos than from the voice.”

The truth, so famous author Philip Yaffe argues is that the actual words “must dominate by a wide margin.”

There are of course a number of other most powerful elements to consider when thinking about speech. One of the most important ones that researcher Andrew Newberg uncovers in his book “Words Can Change Your Brain” is facial expressions that we carry.

Newberg explains his reasoning for why the Mona Lisa’s contented smile turned into one of the most well known paintings around the world:

“We know that smiling is a very powerful gesture; we were doing a research study looking at different symbols, and the symbol that was rated with the highest positive emotional content was the smiley face. The painting of the Mona Lisa is one particular example of that feeling of calmness.”

Talk no longer than 30 seconds in a given conversation

Another element for how we can process language is the number of words there are for us to process. Of course we know this as somewhat obvious and yet it’s always a great reminder:

“The human brain can really only hold on to four things at a time, so if you go on and on for five or 10 minutes trying to argue a point, the person will only remember a very small part of that.”

Instead, 30 seconds is the optimal amount for us to speak at any given time says Newberg:

“Speak briefly, meaning that you speak one or two sentences, maybe 30 seconds worth or so, because that’s really what the human brain can take in.”

Avoid adverbs in speech and writing

Something I struggle the most with is to stop using adverbs. They are, in fact one of the worst elements of speech and even make a listener or reader lose trust.

“Using single words to describe actions and objects quickly brings them to mind. When someone “stabs” a straw into their drink we see it, but “pokes swiftly” is not so clear. When a person “meanders” it is more accurate than “walking slowly.”

Peres goes on to explain that “too much unnecessary text induces skipping.”

What we easily forget on a very high level is that using fewer words builds trust. So any words that don’t convey meaning can erode our readers’ and listeners’ interest.

The skill of asking questions: “What would you do?”

When I read this, I realized I totally suck at it. Journalist-turned-entrepreneur Evan Ratliff put it like this “all that’s really saved me (so far) from madness is being able to formulate questions that deliver useful answers.”

To give an example:

His advice is to practice questions that begin with the 5Ws in order to have more meaningful conversations.

Removing “is” from your language

This next one is super interesting. Alfred Korzybski, the creator of General Semantics was firmly convinced that the ‘to be’ verbs like “I am, he is, they are, we are” promoted insanity. Why? Quite simply because things can’t be exactly equal to something else. Douglas Cartwright explains further:

This X = Y creates all kinds of mental anguish and it doesn’t need to because we never can reduce ourselves to single concepts. You believe yourself to have more complexity than that, don’t you? Yet unconsciously accepting this languaging constrains us to believe we operate as nothing more or less than the idea we identified ourselves with.

Read the following list of examples and you’ll see immediately how different the outcome of the statements is:

You, Because, Free , Instantly, New – The 5 Most persuasive words in English

In a terrific article, Gregory Ciotti researched the top 5 words in English. His list is not surprising and yet the research behind it is extremely powerful.

“You” – or your name is something that’s so easy to be forgotten and yet so important for great communication:

“Remember that a person’s name is to that person the sweetest and most important sound in any language.” ~ Dale Carnegie

“Free” – Gregory explains Ariely’s principle of loss aversion. All of us naturally go for the lowest hanging fruit and free triggers exactly that: 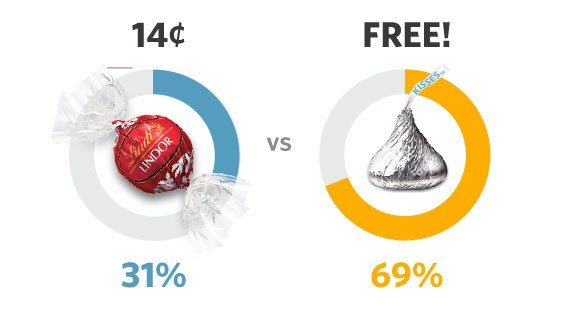 “Because” – Because is probably as dangerous as it is useful. Creating a causal relationship is incredibly persuasive:

“even giving weak reasons have been shown to be more persuasive than giving no reason at all.”

“Instantly” – If we can trigger something immediately, our brain jumps on it like a shark, says Greg:

“Words like “instant,” “immediately,” or even”fast” are triggers for flipping the switch on that mid-brain activity.”

The last tip, that surprised me a little comes from Andrew Newberg. His research suggests that negative arguments have a very detrimental effect to our brain. We need to pay particular attention to not let them take over and working against them with this 3-to-1 ratio:

“When you get into a dialogue with somebody to discuss any particular issue, a three-to-one ratio is a relatively good benchmark to think about; you wind up creating the opportunity for a more constructive dialogue and hopefully a better resolution.”

I love exploring how we can improve our language for better conversations and better lives. What have you found to work best when talking/writing to others?