Can you remember a period in your life when, if you look back on it now, time seemed to stretch on forever? When a week seemed like four, or an hour seemed like it went on for days? What were you doing during that period?

Chances are, you were probably doing something (or a whole bunch of somethings) that was brand new to you and demanded your attention. The funny thing is, by focusing on what you were doing, you actually slowed down time (or how your brain perceived that time, anyway).

Yet “brain time,” as Eagleman calls it, is intrinsically subjective. “Try this exercise,” he suggests in a recent essay. “Put this book down and go look in a mirror. Now move your eyes back and forth, so that you’re looking at your left eye, then at your right eye, then at your left eye again. When your eyes shift from one position to the other, they take time to move and land on the other location. But here’s the kicker: you never see your eyes move.” There’s no evidence of any gaps in your perception—no darkened stretches like bits of blank film—yet much of what you see has been edited out. Your brain has taken a complicated scene of eyes darting back and forth and recut it as a simple one: your eyes stare straight ahead. Where did the missing moments go?

Before I explain these time-bending powers you didn’t know you had, let’s back up a bit and look at how our brains perceive time normally.

How we perceive time

Our ‘sense’ of time is unlike our other senses—i.e. taste, touch, smell, sight and hearing. With time, we don’t so much sense it as perceive it.

When our brains receive new information, it doesn’t necessarily come in the proper order. This information needs to be reorganized and presented to us in a form we understand. When familiar information is processed, this doesn’t take much time at all. New information, however, is a bit slower and makes time feel elongated.

Even stranger, it isn’t just a single area of the brain that controls our time perception—it’s done by a whole bunch of brain areas, unlike our common five senses, which can each be pinpointed to a single, specific area.

So here’s how that process affects the length of time we perceive:

When we receive lots of new information, it takes our brains a while to process it all. The longer this processing takes, the longer that period of time feels:

When we’re in life-threatening situations, for instance, “we remember the time as longer because we record more of the experience. Life-threatening experiences make us really pay attention, but we don’t gain superhuman powers of perception.”

The same thing happens when we hear enjoyable music, because “greater attention leads to perception of a longer period of time.”

Interestingly though, that doesn’t mean doing something over and over again, can’t have a significant impact on your brain, in fact practice can fundamentally rewire your brain, too. 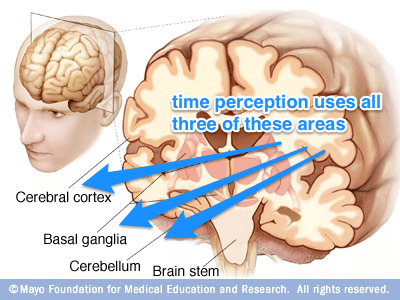 The more detailed the memory, the longer the moment seems to last. “This explains why we think that time speeds up when we grow older,” Eagleman said—why childhood summers seem to go on forever, while old age slips by while we’re dozing. The more familiar the world becomes, the less information your brain writes down, and the more quickly time seems to pass.

“Time is this rubbery thing,” Eagleman said. “It stretches out when you really turn your brain resources on, and when you say, ‘Oh, I got this, everything is as expected,’ it shrinks up.”

The best example of this is the so-called oddball effect—an optical illusion that Eagleman had shown me in his lab. It consisted of a series of simple images flashing on a computer screen. Most of the time, the same picture was repeated again and again: a plain brown shoe. But every so often a flower would appear instead. To my mind, the change was a matter of timing as well as of content: the flower would stay onscreen much longer than the shoe. But Eagleman insisted that all the pictures appeared for the same length of time. The only difference was the degree of attention that I paid to them. The shoe, by its third or fourth appearance, barely made an impression. The flower, more rare, lingered and blossomed, like those childhood summers.

So if your brain got hit with loads of new information over the course of a day, and the following day received hardly any new information, the first day would seem much longer than the first, even though they were exactly the same.

New experiences also happen to improve how we learn and remember information, which I’ve explored before.

Of course, we don’t normally notice this process taking place; all we notice is the weird feeling of a day being really long, even though we know it was just 24 hours.

As we age, this process comes into play even more, making time seem to fly by much faster. This is because the more we age, the more often we come into contact with information our brains have already processed. This familiar information takes a shortcut through our brains, giving us the feeling that time is speeding up and passing us by.

For young children, it’s easy to see how this would work in reverse, since the majority of information their brains are processing would be brand new, and require more time to process.

How to make your day last longer

Learning about the brain is always fascinating, but it’s even better when you can put that learning into practice. That’s why I love this idea of time perception so much—we can use it to our advantage fairly easily.

According to the research, if we feed our brains more new information, the extra processing time required will make us feel like time is moving more slowly. And supposing it’s true that perception is reality, we’d effectively be making our days longer. How awesome is that?

Here are five ways you could put this into practice immediately. If you have more ideas, I’d love to hear them!

Learning new things is a pretty obvious way to pass your brain new information on a regular basis. If you’re constantly reading, trying new activities or taking courses to learn new skills, you’ll have a wealth of ‘newness’ at your fingertips to help you slow down time.

A new environment can send a mass of information rushing to your brain—smells, sounds, people, colors, textures. Your brain has to interpret all of this. Exposing your brain to new environments regularly will give it plenty of work to do, letting you enjoy longer-seeming days.

This doesn’t necessarily mean world travels, though. Working from a cafe or a new office could do the trick. As could trying a new restaurant for dinner or visiting a friend’s house you haven’t been to.

We all know how much energy we put into interactions with other people. Unlike objects, people are complex and take more effort to ‘process’ and understand.

Meeting new people, then, is a good workout for our brains. That kind of interaction offers us lots of new information to make sense of, like names, voices, accents, facial features and body language.

Have you ever played dodgeball on trampolines? How about jumped from a plane or raced cheese down a hill?

Doing new stuff means you have to pay attention. Your brain is on high alert and your senses are heightened, because you’re taking in new sensations and feelings at a rapid rate. As your brain takes in and notices every little detail, that period of time seems to stretch out longer and longer in your mind.

Surprises are like new activities: they make us pay attention and heighten our senses. Anyone who hates surprises can attest to that.

If you want to stretch out your day, this is a good way to do it. Try surprising your brain with new experiences spontaneously—the less time you give your brain to prepare itself, the less familiar it will be with any information it receives, and the longer it will take to process that time period. In fact, overwhelming your brain, which we discussed before, is one of the best ways to make time slow down.

Can you think of any other way to send new information to your brain and make it slow down time?