Wanting to change yourself and better yourself is a beautiful and inspiring thing, I believe.

And it turns out that’s also how most other people think: 50% of all Americans for example set themselves a New Year’s resolution.

That’s pretty amazing! What’s not so great is that according to the researcher Richard Wiseman, 88% of all those set resolutions from half of America and probably lots of other people in the world fail. That’s 156 million failed resolutions and disappointed minds each and every year.

The sheer numbers of this really made me think. I wanted to understand better why we are so bad at keeping our newly set out resolutions and what we can do to actually make them stick.

Here is the actual science behind setting a New Year’s resolution and more science on how you can actually change yourself for the better:

What we need to stick to our New Year’s resolutions is willpower. Your brain cells that operate willpower are located in the prefrontal cortex, which is the area right behind your forehead.

That particular area of the brain is also responsible for staying focused, handling short-term memory and solving abstract tasks for example. 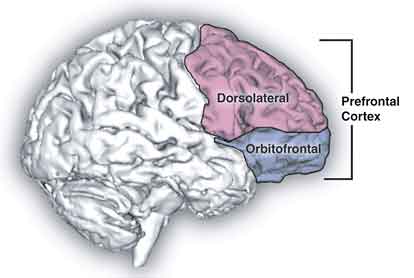 Now, when you set a New Year’s resolution, an enormous amount of willpower is required. It’s an amount that your brain simply can’t handle. To put more scientifically, this is what’s happening inside your prefrontal cortex, best described through a Stanford experiment by Prof. Baba Shiv:

The reasoning of why this happens? According to Prof. Shiv, it’s very obvious:

“Those extra numbers took up valuable space in the brain—they were a “cognitive load”—making it that much harder to resist a decadent dessert.”

So your pre-frontal cortex that handles willpower is like a muscle, that needs to be trained, as Tony Schwartz always mentions . If you decide to train that muscle at the start of the new year with a resolution to quit smoking, start going to the gym, or lose lots of weight, that’s the equivalent of a 300 pound barbell you want to lift without any previous training.

It’s no surprise that your brain can’t do the heavy lifting.

The problem is clear: any abstract goal you have that is not tied to a specific behavior is nearly impossible for your brain to focus on. Making it “instinctual,” which is the crucial aspect that will help you achieve any new habit, is missing in 90% of all New Year’s resolutions, which makes them so likely to fail.

Instead, the key is to make any goal a habit first. And most importantly, make it a tiny one. Here is a list of examples of how this translates to some of the 4 most common new year’s resolutions:

By immediately breaking down each resolution and seeing what the smallest habit could be, your chances of succeeding will be 50% higher. There is nothing more. You make it so easy and simple for yourself to create that habit that there is almost no way you can fail with it.

Ok, but now enough of why the dark and gloomy reasons of new year’s resolutions don’t work. What can we really do to make them work?

So if you’ve set yourself a few big new changes, here are the most important things to consider to actually change your behavior for a better you:

1. Pick only one resolution

As Stanford’s Prof. Shiv explained with her “cognitive overload” experiment, sticking to more than 1 New Year’s resolution is near impossible for your brain to handle. Instead, analyze everything you’ve thought about to change and pick the one thing that’s most important for you.

Then, let go of everything else, otherwise you’ll be picking the chocolate cake for every situation, instead of the choice that you set out to make.

Now that you’ve picked one resolution, make sure to break down as far as you can, to the simplest task possible. If your resolution is “going to the gym”, turn it into the tiniest habit possible that you can perform in under 60 seconds.

BJ Fogg from Stanford created a great application exactly for this, called TinyHabits. It’s an awesome way to get started with any new year’s resolution you have in mind:

3. Hold yourself accountable for what you want to change: Tell others or write it down

In a study from 2007 performed by researcher Evans, they found a striking correlation between increased social support and lowering blood pressure, heart rate and cortisol. What does that have to do with New Year’s resolutions?

Well, it has proven as striking evidence that the people around you can have a significant impact on your behavior. So if you tell some of your friends and family about the new tiny habit you’ve created, you are much more likely to stick to it.

Another hint here is that writing it down not only makes you more likely to succeed with your new habit and on top of that, increases your overall happiness.

4. Focus on the carrot, not the stick – positive feedback and rewards increase your chance of success

A powerful study from the University of Chicago outlines how clearly positive feedback on any of your new habits will increase the likelihood of your success with your new habits and resolutions.

Hand in hand with this goes the fact that rewarding yourself for advances with your habits with things that make you feel great are a sure fire way to increase your success rate, according to Richard Wiseman’s 59 Seconds: Change Your Life in Under a Minute.

So treating yourself to an unhealthy snack after a few days of successful diet habits changes is more than appropriate if you really want to make it through the other end.

Eric Barker also has a terrific list of more things you can do to make sure your new resolutions will end well.

Quick last fact: Strong willpower is not a character trait

One very comforting and important last fact is that having strong willpower is not something we’re born with, as opposed to popular opinion.

“Research suggests that willpower itself is inherently limited, and that our January promises fail in large part because the brain wasn’t built for success.”

So just like your bicep has to be trained in order to grow stronger, so does the prefrontal cortex in your brain. The key is to make sure not to start lifting too heavy, as then we’re bound to drop everything on the floor with our new year’s resolutions.

With all this info, the only thing that’s left for me to ask: Do you have any New Year’s resolutions? How are you planning on approaching them? I’d love to hear your thoughts on this in the comments.