Out of all internet users 67% are using social networks. And which kind of demographic uses which social network has been forever interesting for marketers. Some of the latest insights from Pew Research centers reveals the latest stats.

Most of the findings are in line with what you might expect and some are truly surprising. For example, people living in cities spend the most time on Social Media, at 70% of the population. And women, on average, spend 9% more time on social networking sites than men.

Let’s dive into a further breakdown of the stats: 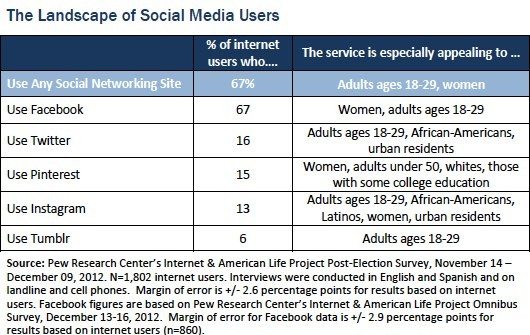 So, who is the average Facebook user? According to the research, it’s a young, 25 year-old woman, living in a big city, with a college degree and a household income of more than $75k a year.

Interestingly, here at Buffer, we’ve just completed a similar research to find out more about demographics of our users. Who is your average Buffer user? Here are two key ones we found


So what about other details, age groups, demographics and more? Here are all the details on it:

What do you think of the latest user demographic research? Are their any key insights you can take away and use for your business? I’d love your thoughts on this!

Quick note: We’ve got a few secret, new Buffer features to share images directly from a page and more.