The following post is a guestpost by Walter Chen, founder of a unique new project management tool IDoneThis. More about Walter at the bottom of the post.

Ever go through a phase where you feel like every day is a Monday? You wake up, you hit snooze. Then you hit snooze again and you just don’t feel it?

Yes, I know that negative emotions can eat away at my productivity, creativity, decision-making skills. And yet, I have to admit that sometimes it’s really difficult to reverse the course of a slump.

The unfortunate superpower of the negative is that it has a stronger impact than the positive.

In fact negative impact of setbacks in your work is three times as powerful in affecting motivation than positive progress. It’s just easier to remember the bad stuff that has happened to you during the day than the good.

So why is it, that our brains have a such a negativity bias? The reason is quite simple: They’re actually wired to pay more attention to negative experiences. It’s a self-protective characteristic. We are  scanning for threats from when we used to be hunter and gatherers. But such vigilance for negative information can cause a narrowing, downward spiral and a negative feedback loop that doesn’t reflect reality.

Fortunately, we aren’t doomed by our natural disposition towards negativity.  What’s amazing is that we have the ability to break out of that negative feedback loop and we can actually rewire our brains to think positively. Understanding how the brain can refashion its own connections is the key to unlocking the durable power of positive thinking.

And that’s exactly what this post is all about. Let’s dive in:

The Tetris Effect: What it tells us about how our brains learn new things

Anyone who’s ever played the classic, old-school game of Tetris will know this. Whether on a clunky computer or gameboy or the latest mobile device we all know the game’s surreal ability to spill into real life. After you shut off the game, you still see those Tetris blocks falling in your mind’s eye.

You’re grocery shopping, and you find yourself thinking about rearranging items on grocery shelves and carts in the parking lot. Somehow your mind continues to play the game, even when you’re physically not.

Robert Stickgold, Harvard professor of psychiatry, noticed something similar after a day’s hiking a mountain in Vermont. That night, he dreamt that he was still going through the motions of mountain hiking, clinging to rocks. Curious about this dream replay he tried something: Stickgold got a group of college students of varying skill levels to play Tetris and sleep in the Harvard sleep lab.

Over 60% of the study participants (including, surprisingly, those who suffered from amnesia) reported dreams of images of Tetris pieces falling, rotating, and fitting together. Interestingly, half the Tetris expert participants reported such Tetris dreams while 75% of the novices did. The mind was continuing to work on making sense of the game during sleep.

A more recent study from 2009 it was found that playing Tetris can grow your brain and make it more efficient. Adolescent girls played the game for an average of 1.5 hours a week over three months. The cerebral cortex, or the gray matter, of the girls grew thicker while brain activity in other areas decreased compared to when they’d started. Richard Haier, who had previously found in a 1992 study that there was a “Tetris learning effect” in which the brain consumed less energy as mastery of the game rose, concluded,

“[W]e think the brain is learning which areas not to use. . . . As you learn the game, it becomes more automatic.”

Haier’s 2009 study demonstrated how Tetris affected the brain’s plasticity, or the brain’s ability to change structurally, as the girls practiced and learned how to play the game. Neurons, or nerve cells, in your brain make connections, communicating through synapses. When you learn something, you change those neural connections. Every time you reactivate a circuit, synaptic efficiency increases, and connections become more durable and easier to reactivate. Stickgold’s study and subsequent research that sleep plays a role in this memory process.

So to sum up, whenever you do specific tasks over and over again, they take up less of your brain power over time. And that’s pretty amazing, as this will be the basis for a huge opportunity to change our behavior for the better:

So how can we combat our negativity bias? The Positive Tetris Effect.

Indeed, it’s quite simple: We can harness the brain’s plasticity by training our brain to make positive patterns more automatic. When we practice looking for and being more aware of positive aspects of life, we fight off the brain’s natural tendency to scan for and spot the negatives. Naturally we bring ourselves into better balance.

Shawn Achor frames this rewiring as “The Positive Tetris Effect” in The Happiness Advantage, drawing from the way Tetris impresses our brain so that we end up parsing the world in terms of the game. According to Achor, with the positive Tetris Effect,

“we can retrain the brain to scan for the good things in life—to help us see more possibility, to feel more energy, and to succeed at higher levels.”

Yes, so something as trivial as the game of Tetris can have a scientifically measurable effect on people’s brains and invade their dreams. If that’s the case, the impact of practicing and retaining a more positive thinking pattern, especially on our wellbeing and happiness, can be even more powerful.

We are basically trying to find an undiscovered path that if walked once, makes us happy. The path being the synaptic connections in our brain. And then, because we enjoy it, we go along that path, hundreds and hundreds of times. Slowly a track forms and becomes very clear and easier to walk every time.

Here is an example of a synapse, which represents the path we want to go over and over again, to make it a strong, easy to recognize pattern for our brains:

The best thing about such a practice is its long-term effects. In one study, people who did a “three good things” exercise for a week felt happier and less depressed after one month. The study then did the three-month and six-month follow-ups. Not surprisingly, the happiest participants were the ones who had continued the practice throughout.

What this tells me right of the bat is this: There’s hope for us all! (Even for a curmudgeon like me who reacts to the idea of spending time trying to accentuate the positive with a growl.)

So I think a good way to see the positive Tetris Effect like learning a foreign language. It will be the most difficult and unnatural-feeling at the beginning. And yet, the rewards will make you feel unbelievably happier if you stick with it.

Ok, now that we’ve been through the background it’s time to get our hands dirty. How can we put all of this into practice?

At the core, the Tetris Effect is about building a habit that becomes more automatic and therefore longer lasting. In turn, this will sustainably boost your productivity and creativity. As Achor notes,

“Happiness is a work ethic . . . . It’s something that requires our brains to train just like an athlete has to train.” 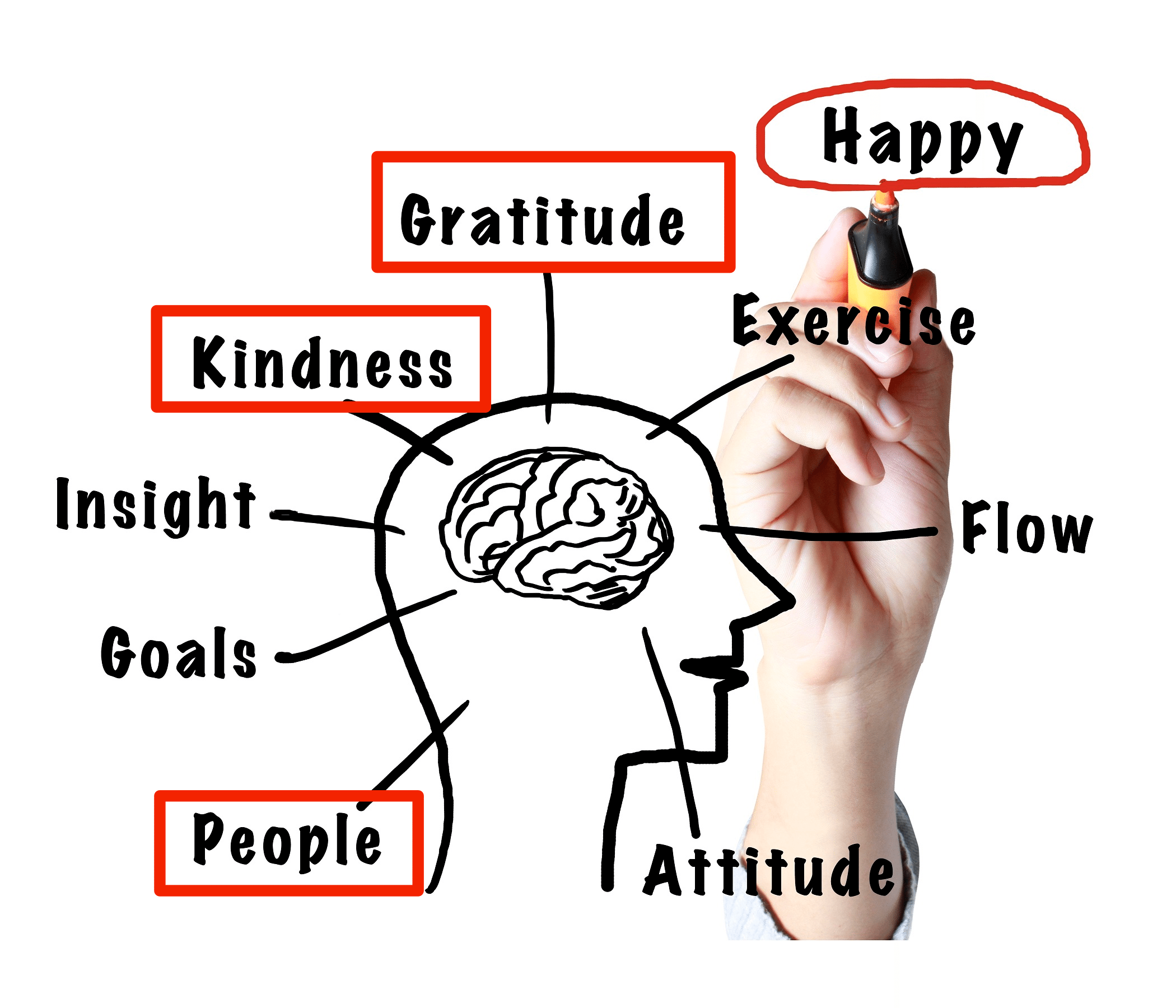 So with that in mind here are some of the top ways that Achor and others identified to rewire your brain for positivity:

The regular practice of mindfulness meditation has also been shown to affect the brain’s plasticity, increasing gray matter in the hippocampus, an area of the brain important for learning, memory, and emotion, and reducing gray matter in the amygdala, an area of the brain associated with stress and anxiety. Take a look at these tips on mindfulness and meditation to get started.

Over to you now. Have you discovered some of these techniques to focus on creating more happiness for yourself? I’d love your thoughts on this topic.

About the author: Walter Chen is the co-founder of iDoneThis, a simple way to preserve and celebrate progress at work, every day, that amazing companies like Zappos, Shopify, and reddit use.  He’d love to hear from you on Twitter at @smalter.