As the New Year approaches, many of us find ourselves in a reflective mood. And that’s exactly how JotForm founder, Aytekin ‏Tank, felt as 2017 was drawing to a close.

As he walked along the Embarcadero, one of the liveliest and most scenic areas in San Francisco, looking back on the year, he was a little zoned out to everything happening around him. Meditative. Introspective. Contemplative.

He had many things to celebrate: JotForm had grown to a team of more than 130 people across the globe, it had more than 3.2 million users and its revenues continued to climb every month. It’s also worth noting that all of this happened without taking a dollar in outside funding — a not-so-common story in Silicon Valley these days.

But despite all the good news, there was something that didn’t quite sit right with him.

“Our competitors were super loud on the internet and their user numbers weren’t even close to ours,” he explained to me. “They were announcing one investment round after another, ending up on top of TechCrunch, and we were just quietly going about our business.”

During these moments of reflection, Aytekin realized that, like his competitors, he also had a story to tell.

So he decided to do just that — share his story. But in his own unique way.

💡
Schedule your tweets and save time with Buffer
Craft the retweet-worthy tweets, learn what works and schedule your posts at the right time (in half the time) with Buffer's Twitter scheduling and analytics tools.

Building a brand through stories

The first order of business for Aytekin was simple:

With autonomous teams around him, he was able to dedicate his time to whatever tasks he felt would impact the business the most, so going all-in on content was an easy decision for him.

His first post — How NOT following my dreams enabled me to build a startup with 3.2 million users — was published in a popular Medium Publication, The Startup, and reached over +50K pageviews almost overnight.

His second post — Time off or the top of TechCrunch? — was equally as successful.

“I published these stories on December 18th and 26th respectively”, he explained. “Given their traction and how they resonated with a huge audience, I made my mind up. I was going to get serious about writing in 2018.”

Aytekin had found his niche.

His authentic, honest stories resonated with startup enthusiasts and he decided to write at least two posts per week throughout 2018 to share his journey as founder and CEO of JotForm.

After his initial success on Medium, Aytekin was keen to share JotForm’s story across multiple channels in order to reach new audiences.

In July 2018, he decided to experiment with Twitter. Specifically, he was curious:

After all, Twitter and blogging aren’t really too different:

“Apart from its character limit, Twitter isn’t any different when it comes to sharing your authentic voice,” he explained. “It’s blogging in 280 characters.”

As a platform, Twitter may not have changed too much since over the years — except increasing the character limit from 140 to 280 characters.

But what has changed significantly is the way people use the platform.

Twitter used to feel almost like an RSS feed, full of people sharing links and hashtags, trying to hijack every ounce of attention possible. But now, as Nathan Bashaw pointed out, things are changing:

Some of the best performing tweets nowadays are those that tell authentic stories.

For example, Rodolphe Dutel’s recent tweet about workplace culture really resonated with his audience (and beyond), picking up 31,265 retweets and 134,655 likes.

Would it have been as successful if Rodolphe had simply shared an article link and headline? Probably not.

Kicking off the experiment

Having seen various tweets and threads succeed like Rodolphe’s, Aytekin set out to reverse engineer a “viral” tweet of his own.

The plan was simple:

In order to craft the Twitter thread, Aytekin used his Medium analytics for inspiration:

With this data, he was able to see which articles had resonated most with his audience and tell a story that he was sure would connect with people on Twitter.

He chose to create a Twitter thread based on his post entitled: ‘Don’t listen to those productivity gurus: why waking up at 6am won’t make you successful’.

Here’s a link to the thread:

The aim of this experiment was to test the limits of the Twitter algorithm, and the power of Twitter ads, so Aytekin decided to spend as much as possible on this ad: $24,098 in total.

Here are the results in full:

Aytekin didn’t jump right in and spend $24,000 overnight. In fact, when the experiment started, the plan was to spend a maximum of $5,000.

But as the tweet began to take off, the budget was raised accordingly.

“We started this experiment by saying we wouldn’t exceed $5K in spend,” he explained. “But we kept a close eye on the Cost Per Engagement and Impressions, and raised budget accordingly.”

As the advert was seeing super high engagement rates (over 20 percent at times):

And low Cost Per Engagement:

Aytekin continued to ramp up the spend until results started to diminish. In the end, the experiment ran for over a month in total (between July 15 – August 24).

Due to the high engagement, the thread also received plenty of organic reach on Twitter.

If you’re creating content of any form: videos, blog posts, podcasts, etc, repurposing it across multiple channels is a great way to get the most bang for your buck.

But repurposing doesn’t just mean copying and pasting a link over to Twitter.

If you want to be successful, you need to think about how you can tell each story natively to the platform you’re publishing on.

For this experiment, Aytekin could have simply shared a tweet linking to his blog post and boosted it, but I’m sure that wouldn’t have performed anywhere near as well as the Twitter thread.

By using a format native to Twitter, Aytekin was able to share his story in a way that Twitter users would respond to and be happy to engage with.

2. A Twitter thread can help you to achieve multiple goals at the same time

Impressions and engagement are awesome — especially when you’re quite new to the content marketing game.

But when you use a Twitter thread, you’re able to feature multiple types of content within your tweets and achieve various goals.

For example, in the fifth tweet in the thread Aytekin included a link back to the original article on Medium:

This tweet received more than 1.1 million impressions and over 35,000 clicks, helping to drive traffic back to the original post on Medium.

The sixth tweet in the thread mentioned @JotForm and 4,346 people clicked from this tweet to JotForm’s profile to learn more about the business:

Aytekin also picked up 5,752 followers from this thread.

When it comes to planning an experiment like this of your own, try to think about the goals you’d like to achieve:

Remember: It’s important to tell a great story in a native format, so ensure you use your first few tweets to get people hooked into your narrative before including any links.

3. Twitter is a great place to start a conversation

With any highly shared tweet, you’ll always get a few trolls pop up here and there, but if you look past this, you’ll realize that Twitter is still an incredible place to start a conversation and build relationships.

Following Aytekin’s thread, he received plenty of questions about JotForm and how the business operates. This enabled him to build new relationships with people he previously wouldn’t have reached.

This experiment was designed to test the limits of Twitter ads and the results speak for themselves:

But that’s not to say everything was perfect.

Due to the way Twitter ads work there’s no real way to tell exactly how many unique people saw the ad and many people reached out to Aytekin to say they’d seen the ad multiple times.

And for every great conversation started by this thread, there was another slightly negative reaction. It seems that some Twitter users don’t quite accept ads in their feed like they do on Facebook or Instagram, where ads are more ingrained within the platforms.

Overall though, Aytekin sees the experiment as worthwhile:

“Even though the initial cost was high, the 5,000 followers we gained from this experiment are permanent,” he explained.

“Every time I publish a new post, I get clicks, likes, retweets and comments from these followers. So the results are compounding over time. I can’t be sure if they will become long-term, highly-engaged audience members, but they seem to stick around for now.”

And the great thing is that you can replicate this experiment yourself with a budget of any size.

Simply take a piece of content that’s been successful for you on another channel:

Even if you don’t want to invest any budget in it, repurposing content to Twitter is a great way to connect with your audience and share your stories to another platform.

Have you used Twitter ads? Do you repurpose content from other platforms to Twitter? I’d love to chat about your thoughts and experiences in the comments below.

More than 45,000 marketers and small business owners subscribe to our newsletter to receive our blog posts and exclusive email-only content. 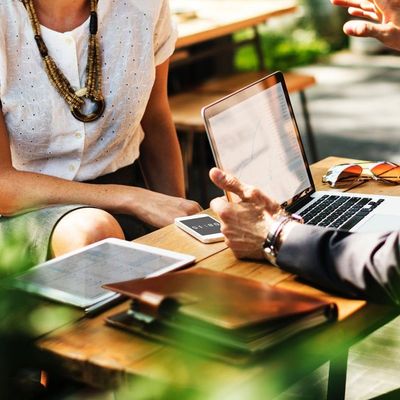