Editor’s Note: Wow – a lot has changed since March of 2012! It’s always so much fun to look back on older posts like this one and to realize how far we’ve come in a relatively short period of time! We just wanted to take a few minutes to give you a quick how-to in today’s world, and we also wanted to share a couple of newer posts that we’ve written on emojis that you might be interested in ??

Emojis now come standard on our smart phone keyboards, and using them has almost become second nature for a lot of us. Using them on our computers can still be a little tricky though.

Using Emojis on a Mac

If you’re on a Mac, you can press command + control + spacebar to bring up the emoji characters palette.

Tip: If you’re planning on using a few different emoji, you can click and drag the palette to keep it up on screen.

Using Emojis on a PC

If you’re on a PC, there’s a few extra steps you’ll want to take. First, you’ll want to install the Segoe UI symbol font and then you’ll want to visit this website where you’ll be able to copy/paste emojis as needed. We got these steps from howtogeek.com – they’ve got more details there if you need them  ?✂??

Admittedly, there’s quite a bit in this post that isn’t quite as relevant today as it was then. Since this post was written, we’ve put together a couple more on the topic of emojis that you might want to check out:

The Deeper Meaning of Emojis: What You Need to Know on How Social Media is Changing Communication: In this post we dive head-first into how emojis are changing the way we communicate. We also explore what this shift means for marketers.

This is Your Brain on Emojis. Here’s How to Use Them in Your Marketing: In this one we take a look at what emojis trigger in our brains, how they’re changing our language and how to try using emojis in your social media and marketing.

Lots of people like to add things like ♥✩♬♡►♪☺♫ to their tweets for fun, but did you know adding emoji and symbols can make your tweets shorter and easier to read too?

Or that there are over 109,000 symbols available? Or that the Wall Street Journal uses symbols to add bar charts to its tweets?

Of course, if you’re mainly into the fun side, symbols can also let you write ǝpısdn uʍop or even black out those ██████ words (now that @SamuelLJackson has joined Twitter). But there’s a lot more you can do with symbols than just start a pie fight:
—=======[}

In this guide, we’ll cover everything you need to know about:

The first step, however, is getting symbols  into your tweets! There are three ways to add symbols to your tweets:

1. Where To Get Emoji & Symbols For Your Tweets

There are several on-screen symbol “typewriters” you can use to compose and send tweets. Here’s one I made myself (click it to try it):

On this interface, hover over any symbol and it will be highlighted with a white background if it works on most interfaces. I added that feature to remind me not to use special symbols that many people won’t be able to see (read the next section for why not everyone sees all symbols).

After seeing my simple idea, developer Iván Rodríguez (@Ivan_RG) created the ultimate Twitter symbol interface, Twitter Symbols (also available in Spanish). Like my interface, there is a box to type in, but underneath his, he created this beautiful and extensive set of symbols (below) Just click, and they are added to your tweet! Click to try it:

Most advanced of all, though not as convenient as Twitter Symbols, is TwingDings. Here you get various “alphabets” of ACSII art that your text can be converted into, as well as a large collection of symbols and common art combinations.

(Update: It seems that TwingDings is no more. It was fun while it lasted :))

For your iPhone, there’s the very cool tweet symbol composing app called Feathers, which has alphabets, symbols and many other features…even morse code: 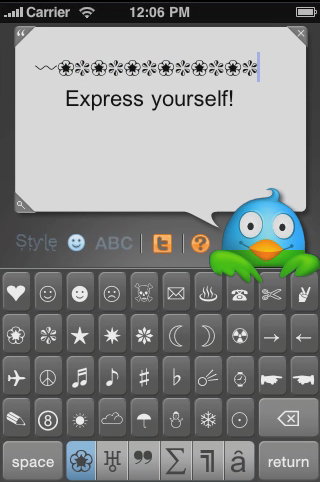 Other alternatives are adding shortcuts to your browser that popup symbols that you can copy. TwitterKeys, Unicode Symbol Map and TwitterSymbols take this approach.

There’s also a great guide to using text symbols, and a giant list of symbols to browse though.

Type Your Own Symbols

This is very convenient for symbols you find yourself needing frequently. I have several memorized.

To do this, you’ll need to use your computer’s number pad—which means you’ll have to have the NumLock set to “On,” or use the special function key on some laptops which lets you use part of the keyboard as a number pad.

Just typing the number from the top row of your keyboard won’t work. You’ll need to hold down the “Alt” key (option key on Mac) while you type, for this to work. Here’s a video introduction:

For detailed written steps, go here. Plus, here’s a giant list of all the codes you can type, and a guide to typing Alt codes from your laptop.

Here are some common symbols you may want to memorize how to type (you don’t type the “+” key): 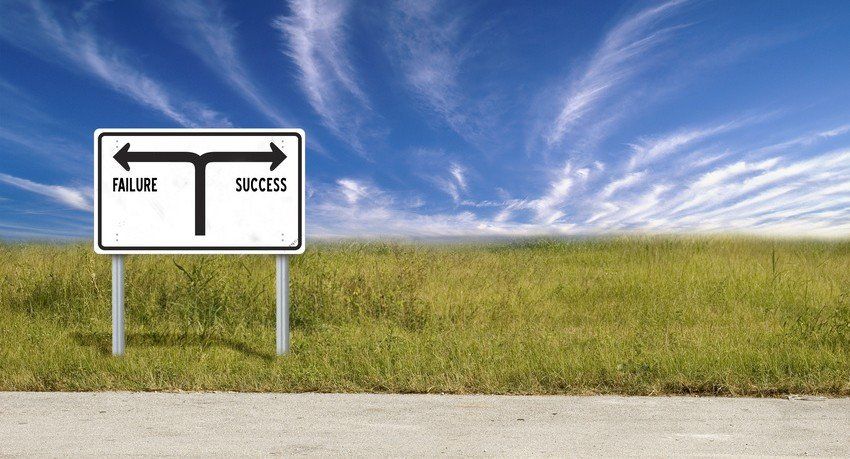 Many mobile devices show very few symbols, which is a good reason not to overdo when adding them to your tweets. All they will show is a little box character “□” where the symbol is supposed to be.

What you need to realize is that symbols in tweets are not really images in the sense of being pictures or photos. They are actually just part of the same text character set that gives us numbers, letters, punctuation and so forth.

For that reason, many symbols do not exist as text characters that you can add to tweets, such as company logos and so forth.

3. How To Make Tweets Shorter AND Easier To Read

Here is an example of two tweets, where the one with symbols is 7 characters shorter, and just as easy—if not easier—to read:

Here’s an example of using symbols in lists, each saving 8 characters versus the first example:

Remember: The ellipses “…” is just a single symbol if you use it correctly! It doesn’t have to be typed as three periods.

So you can also use it between sentences if you just need to save a character, like this:

4. The Big List Of Text Emoticons (Emojis) For Tweets

Did you know there is a thriving ASCII artists community on Twitter? There are even entire comics strips in single tweets done by @TwitComicStrip!

Check out any of these links for some examples:

Why not give it a try yourself? Here’s a great guide to making ASCII art tweets, and a collection of sample art that you can cut and paste into your own tweets.

6. What Do All Those Emojis & Symbols Mean, Anyway?

Not sure what a symbol means? Click any symbol below for a definition and WikiPedia article about it. Some have an interesting history in typography.

7. Writing Upside Down, Blacked Out And Other Tricks Buffer this

What are some of your favorite resources for symbols and art in Tweets? Have a favorite way you like to use symbols, or some great examples of ASCII art?