He said that he didn’t quite know how to achieve this. Yet having a larger audience that is interested in what he is doing, would be very interesting to him. Heck yes I thought, that’s a wonderful goal to have.

We aren’t talking about mindlessly increasing a number here.

Much more, I mean focusing on enlarging your network. With a broader audience that is subscribed to you, more doors will open for you. You will be in touch with more people and develop both your business and personality a lot further I believe.

So here are 6 easy to implement habits for Lance and anyone else, who wants to expand his Twitter following and make it work more effectively.

1.) Tweeting more often, regularly and to a variety of sources

One of the most difficult, yet most important things to do is to Tweet frequently and regularly. When we performed a study on what triggers more Twitter followers, a few months back, a few facts stood out: 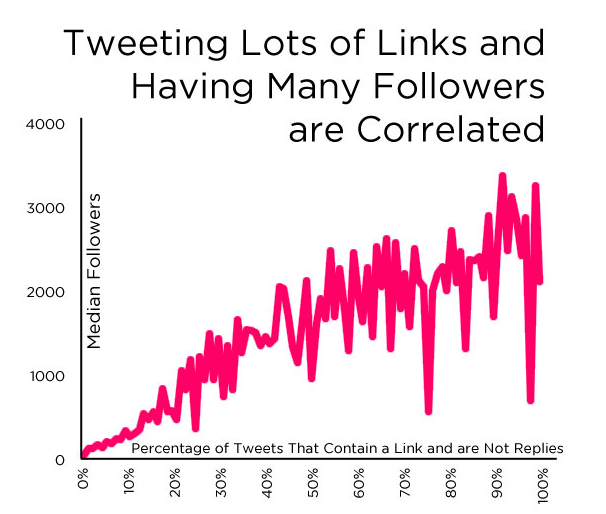 A great example of this is Jay Gould, founder of Foundville. Since his complete change in the way he uses Twitter, defaulting to the three above mentioned techniques, Jay mentioned to me that all his metrics have been growing sharply.

Here are his Twittercounter results, since he started to do this, so you can see for yourself:

A great way to make this most convenient to keep your Tweets coming out steadily is to schedule a few Tweets.

There exist plenty of options to do this, like TweetDeck, HootSuite or MarketMeSuite. If you want it one step simpler, you can also Buffer Tweets. They will then be posted at the optimal times, without you having to schedule them individually.

2.) Endorsing others often and thoughtfully – and publicly

Another habit to get into is to start endorsing others often and thoughtfully. It is something that has helped me a great deal to make my follower count and especially retweet rate jump significantly.

The way this works best I believe is through retweeting the best links form your stream with a short comment. Of course instead of retweeting you can also do the same with posts including the authors name.

Someone who does this in a great way is Mike Stelzner from Social Media Examiner:

This helps to add a lot of value for your followers and at the same time, show your support for other people you are following. Making them your advocates is a natural consequence I found. If you can make this your habit to daily send even just 1 Tweet endorsing others, it is a sure fire way to grow your following naturally and build stronger connections.

3.) Gaining focus with your Tweeting topics

A sentence I keep getting back to comes from my good friend Michael Todd (@mqtodd) who goes by the mantra of:

“Pick 3 words/topics that describe you the best on Twitter, and stick to them with your Tweets.”

To me, that makes a lot of sense, it builds trust amongst your followers. This also makes it a lot easier to create a routine for yourself. So in my case, I picked “Social Media”, “Startups” and “Blogging”. Being that focused, also helps you a great deal to become more proficient in that area. One person that is fantastic to observe about this is Dave Larson from @TweetSmarter. (You might have realised, I keep referring to Dave again and again, he is just too awesome not to.) He mentioned to me, whilst he was completely focused on just Twitter related Tweets, he recently expanded to general news and social media updates too, as click rates and retweet rates indicated great results. Playing around with your core topics is crucial to find out what works best for you.

4.) Limiting your time on Twitter to 60 minutes (or less)

Here is a funny one! Now, you want to double your Twitter audience and my suggestion is to limit your time to do this? Yet, when I personally started to do this, I realised that you can be much more focused and concentrated for a limited time, rather than spending hours and hours on Twitter. It is also very powerful, as it gives you a chance to do things that in return will get you more Twitter followers. Say, you could for example be spending the time instead to write a great blogpost, do a podcast or any other form of productive procrastination. Someone who does this incredibly well is Michael Hyatt (@MichaelHyatt). Although I am not sure, whether he has a time limit, I know that he is a super busy man, spending a very focused time on Twitter. He provides great content day in day out and responds to all Tweets. Just observe his habits and you will learn – I did so!

5.) Posting a quote, or other thoughtful non-link Tweet per day

Now, here is an interesting one for you. Joel (@joelgascoigne) recently pinged me on Skype and said something like the following:

Hey Leo, I have been testing something recently. Instead of making all my Buffered posts Tweets with links I am doing something else. I am posting one, that isn’t a link, but rather a quote or thought I had. I found that these types of posts get a lot more retweets compared to others and trigger quite a few new followers.

We discussed a few ideas, why this might be the case. These are some of the reasons we came up with:

These are just a few things we came up with, I am sure you have more ideas, why they perform better? The results from Joel are pretty convincing. Here is a comparison of a few tweets, with and without links:

The interesting thing is that we could also observe a follower jump, as it is your face circling amongst a lot more followers through native Twitter retweets.

This is something that many people have talked, written and Tweeted about. Yet, there are way too few usages of the new Twitter follow button out there I believe. Heck, even here on our blog, we need to place it there still! Follow @bufferapp// <![CDATA[ !function(d,s,id){var js,fjs=d.getElementsByTagName(s)[0];if(!d.getElementById(id)){js=d.createElement(s);js.id=id;js.src="//platform.twitter.com/widgets.js";fjs.parentNode.insertBefore(js,fjs);}}(document,"script","twitter-wjs"); // ]]>

The new Twitter follow button makes it so easy and straight forward to get you followed it is really amazing. Placing it on my own blog is bringing me 100 new followers whenever I write a new blogpost.

A great example, that owns this technique is Gregory Ciotti (@GregoryCiotti). Greg wrote a full blogpost about getting more exposure with the Twitter follow button. He mentions some fantastic tips about placing it in the right places of your blog, to get most new followers.

It’s something I haven’t regretted since I followed his advice for my own blog.

As my last tip to help you double your Twitter following in 2012, I suggest you create a list of your top Twitter users you want to observe. I have done this a few months back and it was extremely powerful to have such a list of great minds you can check in with every so often.

If you do this, it might even be a great opportunity to turn it into a blogpost about Twitter mentors. The reason I think this works is that there is always more to learn. And observing these personal favorites will remind you to keep a high quality of your Twitter presence.

It is also a great way to retweet selectively and keep in touch with authorities you are looking up to.

Ok, that’s it. I hope some of these tips might help you to adopt a few new habits to make your year on Twitter the most powerful one in 2012.

Do you think some of these new habits could be useful for you?