Facebook changes so fast, I often miss new features or updates to existing ones. Since there have been a few changes recently, I thought it would be helpful to do a bit of a wrap-up of what Facebook’s been up to.

1. Images are now bigger and wider – Here are the right sizes to use

Some recent changes to how Facebook displays thumbnail images mean that we need to be more aware of the size and aspect ration of any pictures we post. Because Facebook will automatically resize images that don’t match its specifications, we really need to remember these details for our images to look right.

The aspect ratio is very specific: image widths need to be 1.91 times the height. This will mean the image scales perfectly in both the desktop News Feed and on mobile. Images are now larger when shown in the News Feed, so keeping the aspect ratio right will make sure your images look great wherever the user sees them.

Recommended image sizes have also changed for Facebook’s desktop News Feed and mobile views. For the News Feed, Facebook recommends thumbnail images of 400×209 pixels. Images that are smaller than these dimensions will be resized to either 154×154 or 90×90 pixels.

Jon Loomer made some amazing graphics to show you what the right, new sizes are:

It seems strange that mobile images are expected to be larger than thumbnails for the desktop News Feed, but Jon Loomer suggests this could be due to the lack of a sidebar on mobile, leaving more space for large images, and the increased usage of tablets with larger screens than smartphones.

The latest iteration of the algorithm could be compared to the growth of search engines like Google and Bing. Both use complicated algorithms with many signals included, such as social and personalization, to determine which search results to show a user. Facebook’s algorithm has become more sophisticated over time in a similar way.

When Facebook launched the News Feed in 2006, it was designed to show users the most important content from their friends all in one place. The tricky part is deciding what’s important to each user:

Facebook says that the typical user has about 1,500 stories that could show in the News Feed on every visit.

What shows up on a user’s News Feed is determined by measuring signals that show how close a user is to friends or Pages, as well as global interaction signals:

For example, if we show an update to 100 users, but only a couple of them interact with it, we may not show it in your News Feed. But if a lot of people are interacting with it, we might decide to show it to you, too.

It’s even smart enough to recognize when a user has a slow Internet connection, and show more text updates that load quickly.

Facebook recently announced a series of blog posts called News Feed FYI that will “highlight major updates to News Feed and explain the thinking behind them.” If you want to stay on top of changes to the News Feed algorithm, this is a good place to start.

3. There are new and improved Page insights

Facebook’s insights for Pages recently got an update that makes them more useful for marketers.

The new insights view includes graphs of Page likes growth, post reach and engagement. It also includes a post clicks section which shows how many times a post received a “stealth click”—i.e. a click that doesn’t result in a story.

You can add benchmarks to your insights now, to test how well your Page performs over certain time periods. This could be really helpful in testing different post types, times or lengths over short periods. 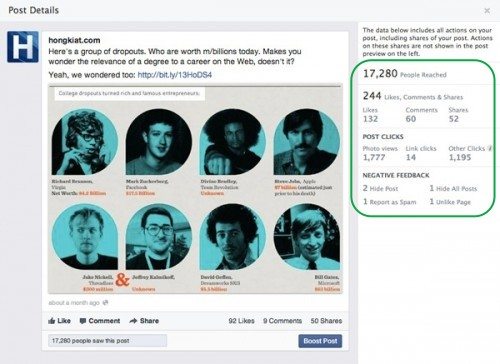 Engagement statistics are now broken down to make them more useful—showing negative feedback, and the breakdown between likes, comments and shares. 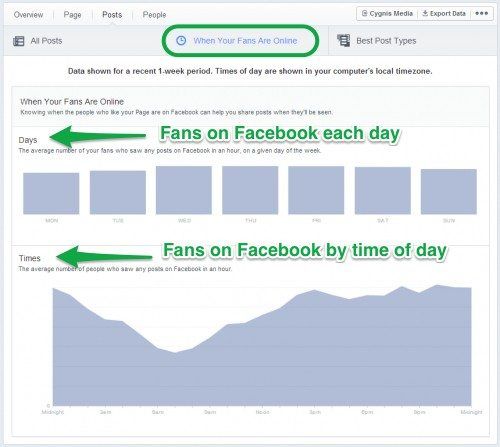 If you’ve read up about optimal times to share on Facebook, you’ll know that it can be tricky to nail down. Optimal timing can differ for each individual Page depending on the audience, so it’s best to figure out what works for you specifically. Thankfully, the new Facebook insights make this easier than ever before. You can now see how many of your fans are spending time on Facebook (in general, not just on your Page) on each day of the week. 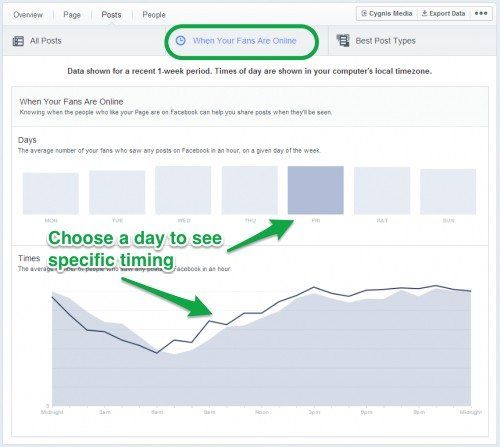 You can also drill down by a specific day to see how the timing changes.

Lastly, you can break down your engagement insights to see how much engagement is coming from users who already like your Page vs. those who don’t. This can be really useful in working towards posting content that your fans will like.

A really recent change Facebook made is the introduction of an “edit” feature on posts. The feature is being rolled gradually out to web and Android users first, with iOS still on the way. 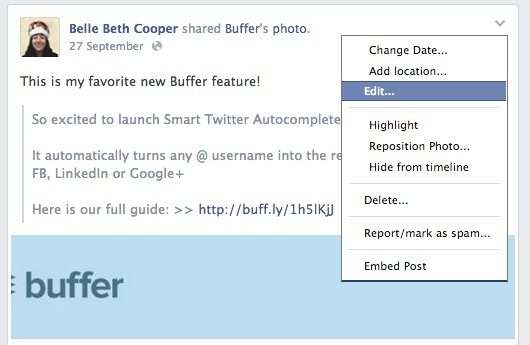 This is the first time we’ve had the ability to change posts rather than simply deleting them when we realize we’ve made a mistake too late. 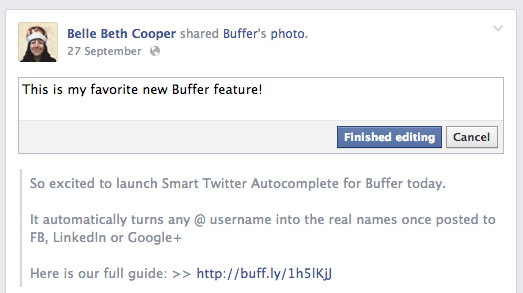 As well as editing a post after publishing, the new feature will let users keep a history of changes they’ve made.

5. You can now Auto-play videos

A lesser-known feature that’s only in a testing phase right now is auto-play for videos in the News Feed:

Now when you see a video in News Feed, it comes to life and starts playing. Videos initially play silently, and if you want you can tap to play with sound in full screen. Scroll past if you don’t want to watch.

Initially, only videos from personal profiles, verified Pages, and Pages of bands and musicians will auto-play.

To start with, this feature is only being tested on Facebook for mobile, and should be rolling out over the next few weeks.

In an effort to make Facebook discussions part of the global conversations around trending topics, Facebook recently opened up two new APIs to selected news partners like CNN, Buzzfeed and Slate.

The Public Feed API will display a “real-time feed of public posts for a specific word.” Only posts that are public (i.e. from Pages or profiles with the “follow” option turned on) will become part of this feed. This will allow news partners to display a feed of Facebook posts about breaking news alongside their coverage.

The Keyword Insights API uses data from all Facebook users, and pulls out anonymous insights about the number of mentions of a specific term. This can also include demographic breakdowns, such as gender, age and location.

So far these tools are exclusive to a small group of Facebook news partners while they’re tested and improved. This is definitely an area to keep an eye on, though. With so much of our data in its hands, it will be interesting to see how Facebook puts it to use.

7. You can embed Facebook posts – Get more likes and follows

At the end of July Facebook announced that posts would be embeddable on other sites. Public Facebook posts from profiles and Page (not groups or comments) including all types of media can be embedded.

Users can engage with posts that are embedded on other sites by liking Pages, following users, liking or commenting on posts and watching video posts.

Kristi Hines makes some great points on Social Media Examiner about how to use embedded posts well, including replacing screenshots with embedded posts so that users can engage with your examples and using embedded posts to share photos or videos to encourage more interaction on your Facebook Page. Kristi also points out how useful this can be for increasing likes on your Page:

This means any embedded posts you use from your page could help boost your number of fans!

Did I miss anything? Have you got thoughts to add on any of these new features? Let us know in the comments.