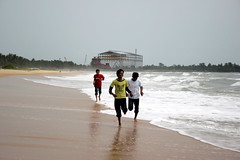 The other day Joel and I went to the beach for a quick break in between work on Buffer.

At home I love to do a few pull-ups in my breaks, but I forgot to bring my pull-up bar to Spain.

So instead we would every few days cycle to the beach where there is a playground right next to it. It has a somewhat similar installation to a pull-up bar built for children to play on and jump around.

This time there was a bunch of children playing vividly and it didn’t make the impression they wanted to take a break anytime soon.

So I asked if we could join in as they were taking turns on doing gymnastics on the bar.

Cheerfully they invited me and Joel to join in. We would do a quick set and then let them do their playing again. They were immediately interested in what we were doing, imitating the pull-ups (the kids were between 4 and 7 years old I estimate) observing carefully how we were doing it.

Before we knew it, a small crowd of kids was around us, counting the repetitions, doing their own pull-ups and encouraging us to do it again so they could observe some more.

It was an astonishing experience and must have looked somewhat awkward from the outside I can imagine.

Of course we returned the favour and started counting their repetitions or moves on the bar, showing the same appreciation they have showed for us.

It takes us a few seconds to jump into a chat with someone, who is doing or saying things that interest you too.

Similar to when children connect, there is no need to introduce yourself. All you have is 140 characters. So you can cut to the point and start out with showing real interest in the other person instead of going through formalities first.

I also learnt that although Tweets are tiny forms of messages they can lead to firm relationships and friendships at a pace only children can usually build them.

Yes, I know I am breaking all the rules of the “weak ties” law here, yet my personal experience with others on Twitter is oftentimes at a level, where I have trouble imagining it could be any more sincere were we to meet offline.

What is there to take away from?

After this encounter with these kids I was once again reminded of how easy and trouble-free it is to struck up new conversations.

Using Twitter naturally as the platform, which facilitates this in every way couldn’t be any more suitable.

There is nothing stopping you from going out there and meeting new people in a rapid yet very sincere pattern on Twitter and I ought to remind myself about it more often.

Do you think we can we learn from children and Twitter’s functionality how to create more and truly lasting relationships?

I hope you can join me in on this reflection, I would love to hear your thoughts on this.

PS: Thanks to Joel (@joelg87) on telling me I should turn these thoughts into a blogpost and helping me brainstorming it.