Along my Twitter journey there is an incredible bunch of people helping and supporting me on the way.

In this post I tried to narrow down the most valuable lessons I learnt from each of them, I hope you too can learn and start following them from here onwards:

1# @TweetSmarter – Perseverance and humbleness is your road to success

If there is only one thing you will take away form this post, then I hope it is you follow and learn from Dave Larson alias @TweetSmarter.

Dave’s passion for Twitter in addition to the non-stop and sustained Twitter presence make him the top person to learn from on Twitter for me. Day in day out, since he joined Twitter with @TweetSmarter in 2008 he is providing his followers with top notch Tips on all things Twitter and Social Media. He is a great example that there are no quick wins on Twitter. Only real commitment and understanding of the environment will bring you further.

Another fascinating point is that even though Dave boasts such a massive account he continues to answer questions from anyone. So feel free to hit him up at any point.

2# @NealSchaffer  – Helping others has never been easier with Twitter 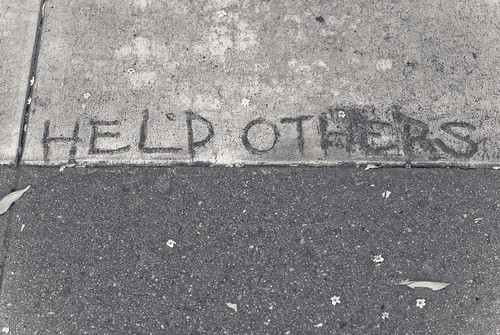 Neal is a great example of how to genuinely look after your followers. Ever since we met he was always supporting us in various ways on Twitter.

He was the first person to tell us that there were performance issues with our site, urging us to fix it as soon as possible. Not only has he introduced many of his friends and followers to Buffer, but he also has given them support on how to use it best.

Being on Twitter gives you a chance to help others fast and in a targeted way. Making use of that more often is highly recommended.

John is certainly the person, who taught me first hand that being respectful and thoughtful of others on Twitter can make or break your appearance. Even though he has a huge following of close to 100,000 followers, he takes the time to thank each and every person after retweets.

There was even a small incident, where I ignored Twitter etiquette twice in our interactions and twice he kindly pointed out to me that there is a better way of doing things. As Twitter is so open being respectful for others is more important then anything I believe.

Aaron is another true Twitter titan that I believe has had a big impact on how I am doing things on Twitter. The initiatives he takes to create more engagement are fabulous.

He offers simple question rounds where anyone can get in touch and ask him for Twitter tips. He then even takes answers to these questions further and words out his thoughts in posts specifically.

He is also a great watchdog in a way, helping users get a voice for and advising Twitter accounts on businesses to embrace the “social” of Twitter more. Start following and talking to Aaron if you want to finally get great conversations going.

Although there are many different lessons Michael taught me, I believe the one that has stuck most prominently is his emphasis on lists.

I reflected on thismore deeply here and can stress it enough how important this is.

Setting up your lists for interest and thought leader groups is the most vital thing as your follower count grows over time. It will guarantee you can keep an overview about all the things going on and help you to manage things better on Twitter.

Without doubt, I believe Joshva is tweeting the best and most motivational quotes I have ever seen. Me and Joel, in a break of our co-working days were literally stunned, asking ourselves “How can he get THAT many, THAT amazing quotes day in day out?”

Sharing whichever content, be it news, quotes or other, always needs to come with high quality. After all you are branding yourself through the things you share. Joshva’s style of only picking the best of the best things you come across has impressed me mightily. It is the same route I want to take.

7# @Kikolani – Your Twitter strategy is not a state, it’s a process

What I have particularly appreciated about Kirsti’s Twitter strategy is that she doesn’t see it as a one time setting you put up and then forget. You test it, you play around and you observe what is working best for you.

In her case she went from automating a large amount of tweets vie Twitterfeed, back to a more personalized form of Tweeting again, simply because she felt she lost some engagement.

8# @MackCollier – Never fake it, there is only one You

Mack is a fantastic example of how to keep a large community and following continually engaged. It is not least for his efforts in creating the fantastic #blogchat. It is an incredible crowdsourced project where a lot of influential Twitter users contribute their thoughts.

The best part is definitely that you can always see that Mack is doing it by simply staying his true self. He is never hyping anything up, nor does it feel he gets carried away by his success. If you like what you do and do it passionately, then Twitter will certainly help you to spread the word. It is definitely the route I want to continue to go down.

Connecting and conversing with these people has taught me many valuable things about Twitter. I hope you can take a few things away for your own Twitter strategy too from them.

Which Twitter users have you learned form the most?